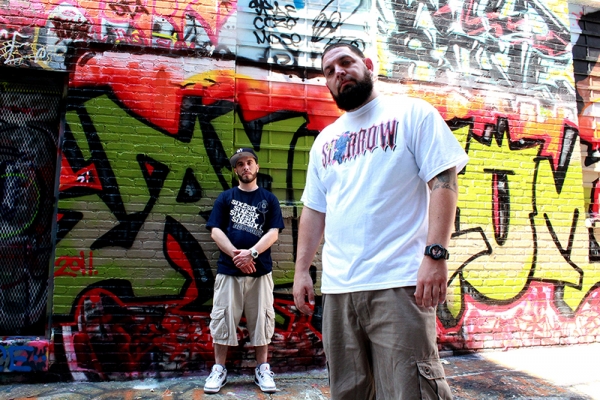 The east coast duo of Baltimore MC M.I. and New Jersey's DJ Cutt have their roots steeped in the Golden Era of hip hop when they met by peforming together at upstate NY college parties in the mid 90's.

From the outset, the pair developed an instant understanding and strong bond which lasts to this day.  As the newly formed Constant Deviants operating from Brooklyn, they made an immediate impact with the release of their debut single 'Competition Catch Speed Knots", still deemed a classic in the modern era.
Their seminal 12"s 'Can't Stop' and '8th Wonder' in 1998 brought them to the attention of legendary industry manager Mark Pitts, and in 2000 M.I. penned a deal with Arista while DJ Cutt engineered several releases for Roc-A-Fella.  Though still working together on side projects, their paths would cross more formally in 2006 while M.I. co-produced a remix of the Rick Ross and N.O.R.E. joint 'Yup' with Cutt.
This would prove a pivotal moment, with the decision made to establish a new boutique label Six2Six Records dedicated to the authentic values of hip hop culture, initially releasing new and re-issued vinyl.  From 2010, the group's prolific output began with the release of their debut album 'Concrete Utopia', followed by 'Amongst Friends' (2011), 'Diamond' (2012) and Avant Garde (2015).

With a sound and brand established internationally in a similar vein to Stones Throw, Hieroglyphics and Mello Music Group, their creative enterprises expaneded into the world of film production, and they collaborated with long time Swiss affiliates SWC Records to release the movie "Swiss Banks" in 2015 which saw M.I. take his first acting role.

A new movie named after the Six2Six label but with a completely original concept and storyline is set for release later in 2016 and again features M.I. alongside Treach (Naughty by Nature), Selena Johnson and Chief Busy Bee Rocker.
Meanwhile Constant Deviants' fifth album, "Omerta", is set for release on June 28th and appropriately in the midst of a highly creative period has an additional twist.  Adopting the personas of Luciano and Lansky due to their Italian and Russian heritage respectively, M.I. and Cutt have applied a concept running throughout.  A comparatively novel approach by today's standards, precedents were set by Kool Keith's 'Tashan Dorsett' and Prince Paul's 'A Prince Among Thieves'.

The tracks act as a series of vignettes, familiar situations and cultural reference points set as metaphors to convey the meanings and messages.  However the sound remains unmistakeably "Constant Deviants" with their trademark blend of jazzy breaks, funk, rock, soul, and turntablism offsetting M.I.'s effortless storytelling delivery style.
In keeping with tru skool traditions, they have followed last year's 3Stylez freestyle video series with another entitled 'Tre Volte' in keeping with the theme.  Simple live footage of a DJ and MC, two turntables and a microphone, the essence of hip hop.
Constant Deviants and Six2Six Records are a lesson in durability with the ability to adapt and evolve over the years while staying true to their core values.  On that front alone, these soldiers of hip hop have earned their medals.