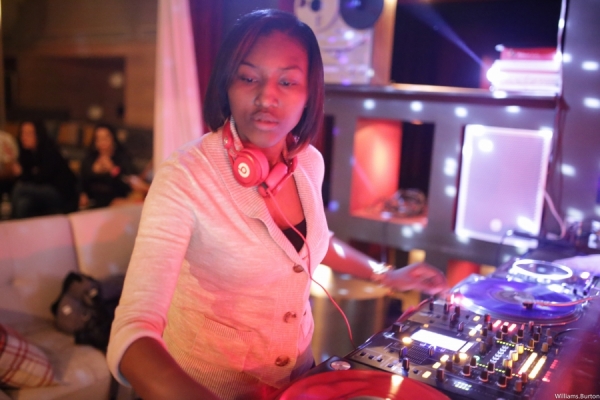 When it comes to Deejaying its pretty straight forward. You're either dope or you're wack, there really is no middle ground. A dope DJ can often get lost among the sea of trendy DJ’s who can only turn a gain knob and fist pump. You can literally walk down the street and trip over a DJ its just that saturated. When you run into a DJ who still respects the art it gives you hope that the art form is still in tact. DJ Gazm has found her niche in a male dominated industry not by mastering the sync button, but by mastering her craft. She has done her homework and passed the test, now she is ready for the world to know her name!

What's going on Gazm how you feeling? I’m feeling great!

Tell our readers where you from? I was born in Kingston, Jamaica and raised in Miami, Fl.

How did you get the name DJ Gazm? Maaaaaan! I thought I would never find a name. One random day, I kept singing Big Boi’s “The Way You Move”, and the part that stood out to me the most was “drip drip drop there goes an eargasm”. I called my BFF to get a second opinion on DJ EarGazm and when she said to cut it short, that’s when DJ GaZm was born.

Take us from the beginning. When did you fall in love with music? As a kid, all I did was play outside and watch music videos from every channel that provided it. The Box, Video Mix, BET, VH1, and MTV were in heavy rotation morning, noon, and night. There is absolutely nothing basic in my taste in music. With me being a 80s baby, I’m able to evolve with music no matter which direction it’s going in.

At what point did you realize that you wanted to express that love and passion through Deejaying? I was always 100% sure that I wanted to be involved with the music world, but I just didn’t know what I wanted to do. I love instruments, but I don’t know how to play any. A good friend of mine introduced me to DJ J. Prince at VP records and I began interning for him. Throughout the interning period, I would always harass him about teaching me how to DJ. Due to him always being busy with gigs and obligations from the record label, he gave me the idea to check out Scratch Academy.

I know that you went to the Scratch Academy. Describe that experience and how it prepared you? Scratch Academy was a huge help. I’m learning from professional teachers that have been through the best and worst of a DJ’ing situation. Jam Master Jay started it, so you shouldn’t expect anything less is greatness. The teachers are patient, and there’s full access to the equipment, even after the semester has ended.

Early on what challenges did you face as a female trying break into a male dominated field? The main issue was people not taking me seriously because I’m a female. At this point, people judging me before they hear me play is not a problem. There’s no doubt in my mind that they’re opinion of me will change after I’m three songs in.

When was that moment when you were like I'm good enough to start doing this full time? I feel it took me longer than it should have. I say that because even though people would tell me I was doing a great job, I would listen to someone else and start doubting myself. I allowed fear to keep me back for a while, but as soon as I stop being afraid to fail, that’s when new doors and opportunities opened.

You have a versatile mixing style and able to play all genres of music that's rare these days especially for somebody as young as you. What made you want to know how to play everything? I wanted to learn how to play majority of the genres because I actually like most of them. Playing music is a feeling, and I enjoy catering to everyone.

Who was your biggest DJ influence when you were coming up? My biggest influence is Timbaland. I’ve always loved him as a producer, but when I found out he used to be a DJ, that helped me push forward with it.

How would you describe your style? I would describe my style as personal. I say personal because I don’t just play top 40 hits. I enjoy today’s version of “crate digging” through hits that I know for sure should’ve been a single.

Outside of Deejaying do you eventually want to produce or become and A&R? I feel like a serious DJ is already an A&R. Production is my end game. The goal is to make timeless music

How do you feel about the new resurgence of South Florida hip-hop? It’s Florida’s time to get some of that limelight. We have a lot of dope artist out here like Jay Burna, Kent Jones, Flo Kid, V Stuck and much more. It’s time to break out of “the crib” and let the world see what we have going on over here.

You have been doing a lot of events with my brother DJ Epps. How did that relationship form? That actually happened through a popular radio-personality from 103.5 The Beat named Stitchez. She heard me DJing at Cool J’s for a customer appreciation event that the radio station was having there. Stichez introduced me to DJ Epps and the rest is history. He’s a super cool guy. Definitely glad to form that bond with someone that respects how I approach my craft.

I know that you mix on turntables. What made you want to stay true and not go the controller or CDJ route? I learned how to DJ on Technics, and there’s no better feeling.

Have you been dropping any mixes? I just dropped one on Feb 18th called “Club Closed 2” you can check that out on my Mixcloud. I am currently working on two more Mixtapes.

More in this category: « Felisha Monet: The Art of the Hustle
back to top
Current Issue