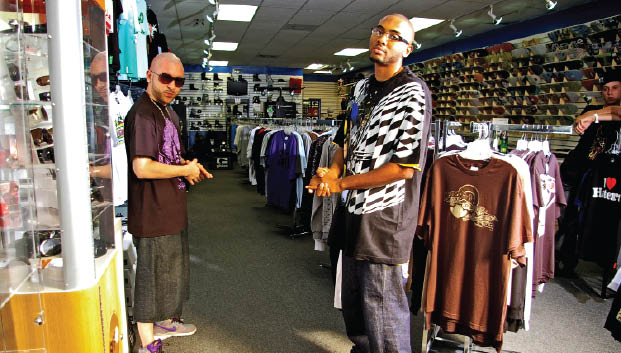 In Morse Code, S.O.S. is a distress signal that meant “save our ship”. It was actually used as a short telegraph from a ship to the closest land or town when the ship was in danger. But for this dynamic duo out of South Florida, it’s a warning to the music industry that it’s in danger of creative change that can’t be over looked. These guys have pushed the envelope to change the sound of hip hop by fusing together all genres of music and moving away from the typical lyrics of gunplay, drugs and money. And the listeners have responded in a big way by showing their unwavering support. They have toured nationally, headlining and opening for mainstream R&B, Rock and Rap notables. With undeniable talent and creativity, this bond between two friends seems strong enough to usher in this new orchestral urban music that will leave the competition sending out a S.O.S.! Let’s get to know more about the SOFLO duo that goes by the name of TRaX (C Dash/Ottey).

What part of South Florida are you guys reppn’?

C DASH: ALL OF IT! I am not big on becoming a “CITY” artist. Regardless of location, most of us go through the same situations and share the same feelings. I am Colombian born, and SOFLA raised is what I tell them.

How did the two of you hook up?

TRAX (C DASH/OTTEY): School and mutual friends is what introduced us to each other. The rest is history.

Give me the story behind your group name “TRaX”.

C DASH: I think it came around the end of 2006 when we decided this was going to be what we focused on. We started going through name ideas and for some reason that’s what fit.

OTTEY: Well, our whole life we’ve always been looking for tracks. Always asking who’s got the newest this and that. After a while we each had created our own little style of making music, but when we came together we both started thinking what could really define us with a name.

Where did your love of music come from?

C DASH: My Family. Everyone on my mothers side is musical. In Colombia, most of them are known artist. As I got older I began to embrace literally every side of it. Besides the fact that I am an MTV BABY, I have just always loved sound. My production displays that a lot.

OTTEY: It came from when I was little during Xmas time listening to Motown records all day and all night. When I got older, I fell in love with hip-hop because my brother was into it. I saw how much it meant to him, and from there I wanted to become the best at it.

I dig the fact that you guys use different genres of music in your songs. Do you feel that this is a distinctive advantage you have in gaining listeners as oppose to other artist that don’t?

C DASH: I don’t think we have ever thought about it like that, but you’re right. It probably does help extremely. All of our fans know by now that we won’t be contained by any one genre. Our main pleasure is the whole “creativity” aspect. We thrive off of making new sounds and mixing old ones with ours.

OTTEY: I don’t think so because a lot of people are afraid of new and different. Sometimes it takes a lot for people to get comfortable.

What has the response been like towards your music?

C DASH: We are averaging a 90% success ratio if not higher. I’m going to need to start keeping track sooner or later. I can instantly tell by peoples reactions that this is going to be what changes not only our lives, but music in its entirety. On stage we kill it every time! We are so energetic it just draws everybody in. Our music is very visual and so are we, so it coincides.

OTTEY: So far, everybody that actually listens to it, gets excited as if it where their own album. I LOVE IT!

Tell me about the Indie label that you are currently with.

C DASH: 1 LIFE ENTERTAINMENT, LLC. established in 2008. It’s the best place for artist like us. We get to do whatever we want however we want to. Everyone supports each other even though we are almost in completely different routes. We have Justincredible who is the backbone to our production, Mohiganga who is the next generation of Latin music, and us. Between our own production and song writing we all have a hand in each others work and believe me...it helps EVERYTHING go along smoother when your not doing it all alone.

Has any majors show interest in TRaX?

C DASH: Interest isn’t enough nowadays to go major. I am not chasing that at the current moment. The independent money is keeping us moving at a great pace. Plus we know it allows us to control more out of the situation.

OTTEY: We haven’t been knocking hard enough yet.

Have you performed in front of a live audience? If so, when and where?

C DASH: That is our specialty. Live performance is what you truly do it for at the end of the day...even more than hearing ourselves on the radio. Like I said, we are really visual so for us to get to more or so act it out, it’s a dream come true every night. We are waiting to go to Europe and do our first shows out there.

OTTEY: I’ve performed in a lot of different audiences. I’ve been on stage since 2001 at least twice a week, even if it’s open mic. Mainly anything I hear about performing, I have to do. People love to see me go on stage cause I do shit they don’t expect.

What do you guys have in store for the listeners with your debut album “ROCKET SCIENCE”?

C DASH: Something everyone is going to keep close to them.

OTTEY: All kinds of music that’s not the same. Everybody should feel it! It is an album that if you got caught listening to it by your grandma, you wouldn’t get in trouble for it. Not too much cursing or gunplay. It’s all about reality.

Who produced the album?

C DASH: JUSTINCREDIBLE and I split pretty much half the production at the end of the day. We didn’t plan on making it that way, but the songs we had fit so perfectly. Don’t get me wrong, we were given some other great production. We had to let go of some favorites but this time around it was just either too much or not enough.

“S.O.S” is definitely a catchy track but everyone in FLA is going to feel “Florida’s The Best”. If you had to choose one track to play in the club, which one would it be?

C DASH: “S.O.S” of course. That’s getting great responses everywhere. The west coast is actually showing it the most love right now. I guess it just has that kind of vibe to it. “Florida’s The Best” was just something we did for another mixtape. The next one is probably going to be “ROCKET SHIP” or “I’M A GAMER”... those two have TRAX written all over them.

Have you worked with any notables in the industry to date?

C DASH: More than a handful, but no name droppin on our time...Thank You!

I can respect that. Give me your Top 5 rap artist of all time.

Where can the readers cop your new album and how can they contact you?

C DASH: ROCKET SCIENCE is scheduled to be released on June 17, 2008. For now, they can get to us through our myspace page at WWW.MYSPACE.COM/CDASHLO OR WWW.1LIFEONLINE.COM

Before you go, drop a couple of shout outs.