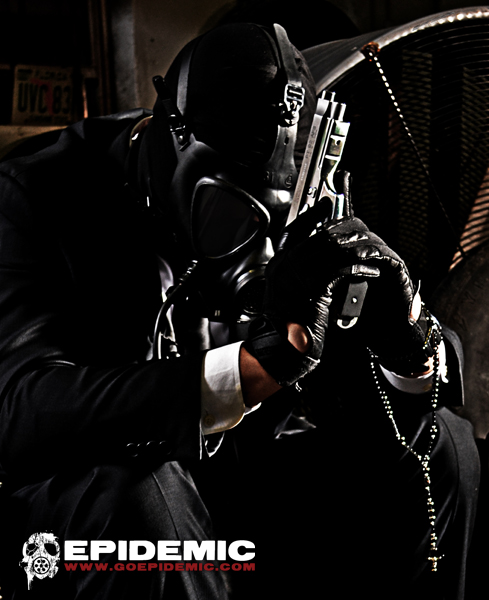 Who is Epidemic?
I'm a Hispanic rapper/lyricist from Miami.

Where did the concept for Epidemic come from?
I came up with the name when I was about 15 years old back in high school. Originally I was a very punchline-intense rapper, and I remember in a battle saying something along the lines of my words spreading like an "Epidemic". A friend of mine told me I should stick to that name and have done so ever since.

What is the significance of the gas mask?
The gas mask is my logo. Along with being related to the whole Epidemic name, the original concept behind the mask is that it filters me from all the toxic music that I believe is out there. It allows me to be myself free of influence and remain uncontaminated. It's the cover of my new mixtape, Second Exposure, and a similar mask was used as the cover of First Exposure which was released in 2006. It's been part of my brand for a very long time so I just decided to incorporate more of it recently.

What style of music do you create and What inspired this style?
On Second Exposure, I think you will be able to see a multitude of styles. One of the reasons I took so long to release it was to ensure that each style I decided to use had been fine-tuned to the point where I felt comfortable. I know the typical response to this question is "i got a million styles" when you ask a rapper, but I have a select few which I feel I use very well to get my message across. For example, I can openly admit that double-time flow is not a strength of mine, so I chose not to use it this time around. You will see that I can make a very lyrical record like "Emotionless" or "Angels Freestyle" or straight-up Dade county song like "I'm a Beast Featuring Black Dada". I can clown rappers with offensive and disrespectful punchlines like "Tell me what you want from me Featuring Novaking" or give you a very introspective genuine record about some past relationships like "Apologies".


What makes Epidemic different?
Content and songwriting ability. OK so you got punchlines? Multi-syllable complex flows? A catchy hook? None of those by themselves are that impressive to me as an artist. The ability to actually SAY SOMETHING while utilizing those elements is what I believe makes an artist and eventually leads to great records. As far as songwriting - I wrote/co-wrote the majority of choruses on my mixtape. To me this is a critical part of cohesion and tying a great song together, since many rappers cant write a hook to save their life. There's a world of a difference in writing a song from scratch and just filling in verses in between a chorus that was written by someone else or the producer. As far as freestyles are concerned, I dont think many artists can successfully do "Black and yellow" as well as "Dead Presidents". Although that may sound arrogant which is very common for up-and-coming rappers to come off as, trust that there is a reason I buried myself in the studio for 5 years after my last mixtape before releasing this one.

Are you currently signed? What is your affiliation with Strictly Business Records?
I'm a free agent. SBR is like my family and crew. They support me and got my back no matter what but I'm not signed or have any contractual relationship with them.

Where are you from?
Me, along with my entire family for a couple of generations, are from Ecuador. I try to visit twice a year because it truly is a beautiful country. It's one of the few places I can go to relax. I'm very light-skinned though so nobody ever correctly guesses where I'm from, lol.

Have any world events influenced any of your songs or your music?
There are some lines regarding the struggles that I have been through personally and also observe everyday. Some socio-economic and political undertones, but usually the current events at the time I'm recording that particular record is what I might mention. For instance, on the Outro of my mixtape there is a line that goes "Well this the outro right? Fuck it keep talking, on this beat because I need it like the Heat to beat Boston". I wrote that during half-time while watching the game at the studio. We still lost though...maybe I shoulda kept my mouth shut?

Who are you focusing on reaching with your music?
Definitely the crowd that pays attention to skill, content, and can tell the difference between good music and garbage. If you truly love music and hip hop then I think you will find my style a bit refreshing.

What artist would you like to work with and why?
Probably Kanye. He puts so much thought into some of his records that I know I would learn so much by just being in the same room as him.

What CD do you have in you car playing?
Soundtrack of a Century - a Frank Sinatra greatest hits CD

What artists have you worked with in the City of Miami?
Not that many simply because I usually don't do collaborations with people I don't know. Some people are the opposite and will jump on any record just to show the world how hard they grind but I'm so critical of the music that I put out that if i don't have 100% creative control over it then I'd rather not do it. Some of those people that I do have chemistry with are Black Dada, Novaking, and Jean. I also spent a good part of my earlier career collaborating with Dela Candela and although we seem like total opposites, we make great music together which is crazy.

What would you like to tell your fans, team members and the people that support you?
They know they are the reason I came back after having called it quits years ago. Thanks for sticking around through all my highs and lows.

Where will Epidemic be at the end of 2011 and what will he have accomplished?
Wherever the current path I'm on takes me. It could be on the highway to success or towards the dirt roads of failure. At the end of the day, I believe I have done my best and thats why I'll be willing to accept whatever outcome is in the cards for me. The industry is politics above all else, so if I accomplish nothing then a large part of that may be due to the fact that I wasn't willing to compromise my integrity or beg some DJ to death to get a record played. It may be because the game is so flooded with average and wack shit that my music will get buried in that landfill. I have faith that good music will prevail at the end of the day and that's what I'm banking on, otherwise I wouldn't have sacrificed as much as I have to get where I am today.

Where can fans hear your music?
My music is available at my website, www.goEpidemic.com .You can download my new mixtape for free directly from there. If you want to preview it, you can also stream the songs there.

How can fans learn more about you?
I will be posting select interviews on my website which I believe give an accurate description of who I am and what my plans are as an artist. You can also find all the social media links on there as well like Facebook & Twitter. The webpage should answer questions, but people can also contact me via e-mail through the site as well.

Give me one word for the haters. ONE WORD.....FUCKEM! (#6 Second Exposure)