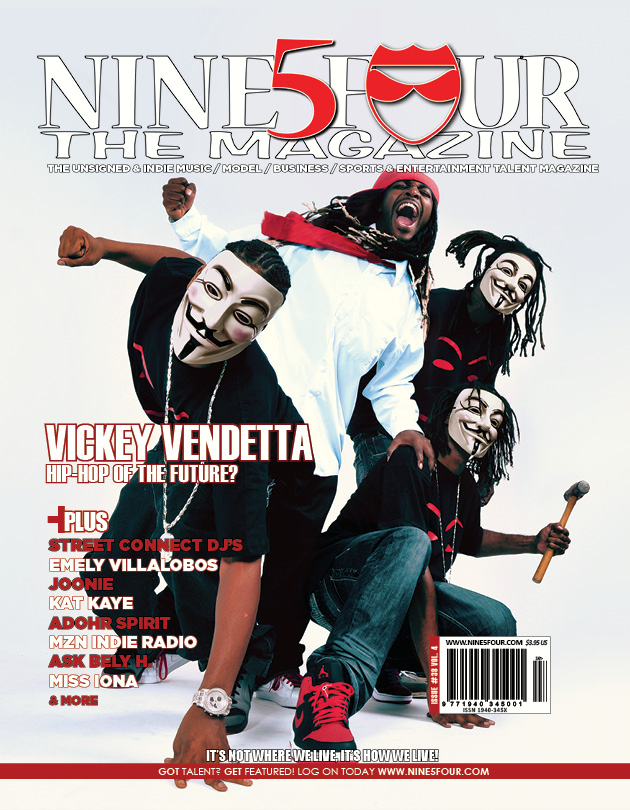 In the history of Nine5Four Magazine we have covered a variety of upcoming, unsigned, signed, indie and any other form of perpetuating talent you can imagine. I can say that until now we have never come across an artist whose role in music and as a general public figure was so profound, with a plan so unique we are not sure to categorize it as uplifting and eye opening or down right diabolical. If you could understand, relate to and even approve the message of a so called "terrorist/idealist" then that would be the best way to describe the campaign that is Vickey Vendetta and the Vendetta Nation.

Vickey Vendetta has stated that he is "An asteroid headed for this Hip-Hop Game" and believes that he will have to tear down the entire system and build it up. "Burn it to the ground" as he says. Vickey Vendetta's music is a clash between home hitting Hip-Hop History with a Southern Swag, dangerous but enticing lyrics to any and every listener, but coupled with a club entertainment vibe that can from track to track switch to double meaning in depth writings of his blunt "Fucked Up" description of a corrupt world structure headed for social disaster. Vickey Vendetta does not claim to be of some elite educated class nor does he express some thick knowledge of politics or world policies, but he is keen on opening the eyes of all his listeners by bringing to their attention what he learns along his journeys. His "Vendetta" his mission that he says all can relate to. "Everyone is on some kind of Vendetta, whether it is in its most natural form of political or social vengeance, all the way down to an unhappiness with the line at the DMV or as small as baby momma drama" says Vickey Vendetta. "We are all on a Vendetta".

But if the potential for discovering oneself and one's inner angers along with the unraveling of world conspiracies that are being carried out as we speak turns your stomach, do not be alarmed. Vickey Vendetta is armed with more than this. His club bangers would almost have you confused as to how an artist can be so diverse, entering a political realm and then jumping right back into the club scene and doing it all so gracefully gutter that it does not seem like a mistake at all. This is because the goal of Vickey Vendetta is to reach through to the people from the source of entertainment. Vick considers himself an entertainer, an actor and another link in the chain of this unraveling destiny that we are all apart of. Tracks like "Pill Man" featuring Trick Daddy and Dunk Ryder's Ice Berg and "Vendetta Goon" featuring Brisco and Ariginal are songs that showcase Vickey Vendetta's diversity and ability to morph on any track he is given. Regardless, you can feel the vendetta come through the speakers as the top notch production is fed to your ears and satisfied in your heart and mind.

For once we will say that no one has to necessarily accept Vickey Vendetta. He is coming no matter what the world has to say. He has proven this by breaking through his county into the state in under 6 months of promoting his street single "Pill Man" featuring Ice Berg. He continued to expand to the commercial market in miami after kidnapping G-Unit/Shadyville DJ Epps, who has embarked on the Vendetta Campaign with Vick by releasing the introductory mixtape entitled "V for Vendetta A Street Saga". Following this up with a series of promotional "Interruption Videos" where he and his band of "Vendetta Goons" are committing awareness/terrorist like activities throughout Florida to spread their message and campaign. Building a buzz through his music and viral videos Vickey Vendetta has secured major shows paired up as a headliner alongside Nicki Minaj, Trina, Rick Ross, Lil Boosie, Young Money, Pretty Ricky and many more. Often banded with his female promotional group "The Vendivas", Vick has show that he can bring a show, an entertaining one at that.

Currently Vick has claimed that he will be bringing this Vendetta Campaign above ground, regardless of recommendation from local government that his message could raise political controversy and even charges brought against him in relation to the patriot act. Vick says that he will fight for his right to free speech and understands that many will attempt to slander his name. But with such a strong following of this Vendetta, its hard to see how the message wont make it out and be delivered properly. To ensure this, Vickey Vendetta has teamed up with the Street Connect DJs to push his next campaign called "Vendetta Above Ground", which is to be released in late October. Vickey Vendetta and The Street Connect DJs has told us simply to let our readers know that they can expect only what they have never seen before.

"This is not a movement, this is a World Wide Vendetta that which anyone and everyone can embark on if they so choose. Everyday you wake to it whether you realize it or not. Put on a mask! JOIN ME!" - Vickey Vendetta