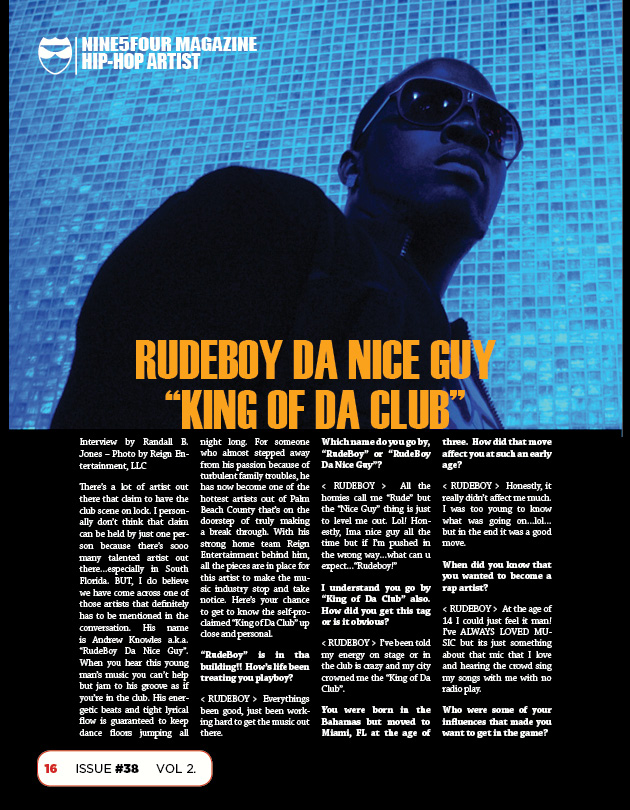 There’s a lot of artist out there that claim to have the club scene on lock. I personally don’t think that claim can be held by just one person because there’s sooo many talented artist out there…especially in South Florida. BUT, I do believe we have come across one of those artists that definitely has to be mentioned in the conversation. His name is Andrew Knowles a.k.a. “RudeBoy Da Nice Guy”. When you hear this young man’s music you can’t help but jam to his groove as if you’re in the club. His energetic beats and tight lyrical flow is guaranteed to keep dance floors jumping all night long. For someone who almost stepped away from his passion because of turbulent family troubles, he has now become one of the hottest artists out of Palm Beach County that’s on the doorstep of truly making a break through. With his strong home team Reign Entertainment behind him, all the pieces are in place for this artist to make the music industry stop and take notice. Here’s your chance to get to know the self-proclaimed “King of Da Club” up close and personal.

“RudeBoy” is in tha building!! How’s life been treating you playboy?

< RUDEBOY > Everythings been good, just been working hard to get the music out there.

Which name do you go by, “RudeBoy” or “RudeBoy Da Nice Guy”?

< RUDEBOY > All the homies call me “Rude” but the “Nice Guy” thing is just to level me out. Lol! Honestly, Ima nice guy all the time but if I’m pushed in the wrong way…what can u expect…“Rudeboy!”

I understand you go by “King of Da Club” also. How did you get this tag or is it obvious?

< RUDEBOY > I’ve been told my energy on stage or in the club is crazy and my city crowned me the “King of Da Club”.

You were born in the Bahamas but moved to Miami, FL at the age of three. How did that move affect you at such an early age?

< RUDEBOY > Honestly, it really didn’t affect me much. I was too young to know what was going on…lol…but in the end it was a good move.

When did you know that you wanted to become a rap artist?

< RUDEBOY > At the age of 14 I could just feel it man! I’ve ALWAYS LOVED MUSIC but its just something about that mic that I love and hearing the crowd sing my songs with me with no radio play.

Who were some of your influences that made you want to get in the game?

< RUDEBOY > Micheal Jackson, Pac, Biggie and a few others. But mostly Mike is the reason why I’m so open to different sounds and styles of music.

You decided to get really serious about pursuing your career at age sixteen. Tell me how you were able to get the attention of Mike Green (head of A&R) at Platinum Records Studios and how it changed your career.

< RUDEBOY > Back when I was living in Miami, me and my cuzzo Patrick had our group called “Miami’s Most Wanted” and damn for some young dudes we where killing it! I guess it caught Mike Green’s attention and the rest is history.

What happened when you moved to Palm Beach County at the age of eighteen that made you decide to put your career on hold?

< RUDEBOY > I guess I was just stressed out! I mean, at 18, I shouldn’t be but life wasn’t really good at that time. Fighting with the fam and stuff like that was just to much for me at that time.

How did local producers Smif-N-Gunz get you back on track?

< RUDEBOY > They pushed me night and day man! I mean no sleep!! Them boys work, work, work…they made me realize this music is me!

How would you describe your style of music and what makes you different from the rest?

< RUDEBOY > My style of music is Urban Electro Pop. And what makes me different is the way I work and the way I live the music. Music is my life but God comes first.

What has the response to your music been like from the streetz?

< RUDEBOY > So far its been good! My new single “Feenin” featuring 2 Pistols just started getting radio play and the Dj’s are loving it!

I heard your new track “Feenin” featuring 2 Pistols. I think you have another club banger on ya hands right there. How did you guys link up to do the track?

< RUDEBOY > My management got linked up with his manager Erik M to help out with the promo. Working with his people I eventually got a chance to meet 2P. We did a show together for Memorial Day weekend and about 2 months later we knocked out “Feenin”. 2 Pistols is one of the realist dudes I’ve meet in the game. Dude is humble…NO LIE…and he reached out after the track was done to help push it too. Most artists don’t even give a damn but that homey is cool!

You opened for Akon at the Polo Stadium in Wellington, FL this year. How did you get the gig and how was the vibe with Akon?

< RUDEBOY > My label had a relationship with Akon’s label SRC and reached out to the producers of the event. They heard my music and it was on. Damn, the homey Akon was incredible! His energy level is EXTRA HIGH and sharing the stage with him was a blessing and a day that I will never forget. The crowd was going CRAZY when I hit the stage man! I had to look back to see if Akon was there! Lol!

Tell me a little about your home team at Reign Entertainment, L.L.C.

< RUDEBOY > Reign Entertainment is my family all day!! They don’t play NO GAMES and I’m just proud to be the first artist off their label! It also feels good to say that I’m part owner of the label…Chhh!

You write some really tight songs my man. When can we expect a full length CD (not a mixtape) from RudeBoy?

< RUDEBOY > Hopefully everything should be done by the end of the year. The title is going to be “RUDEBOYWORLD”.

Who in the industry would you most like to do a colabo with and why?

< RUDEBOY > Right now I would have to say B.O.B because he’s really on top of his game. I’ve watched him grow from the TJS Dj’s days to what we see now and he’s someone who is gonna be around for a long time. That’s what I’m about…longevity!

Is there anything else you would like to promote at this time that you are currently working on?

< RUDEBOY > Yeah of course! My album “RUDEBOYWORLD” and the video for “Feenin” will be shot soon, so look out for that along with my webisode series Rudeboyworld.

Where can the readers go to sample your music and to follow your career?

MY radio show Every Thursdays, tune in w4cy.com @10pm for ON N POPPIN Radio

I appreciate you taking the time to share with us today. I know you got some shout outs to drop…Let’m rip!!

< RUDEBOY > AYO SHOUT OUT TO REIGN ENT, MONIQUE B, DA’VID, SMIFNGUNZ, ERIK M, 2PISTOLS, NINE5FOUR THE MAGAZINE, FLORIDA AND TO ALL MY FANS…THANKS FOR THE SUPPORT! REMEMBER AS LONG AS YOU KEEP GOD FIRST, ANYTHING CAN HAPPEN! IT’S RUDEBOY DA NICEGUY…GET USE TO ME BEING AROUND BECAUSE THIS IS ONLY THE BEGINNING .......CHHHHHHH!!!!

Tweet
More in this category: « Vickey Vendetta GET ON YOUR J.O.B 9-5 »
back to top
Current Issue