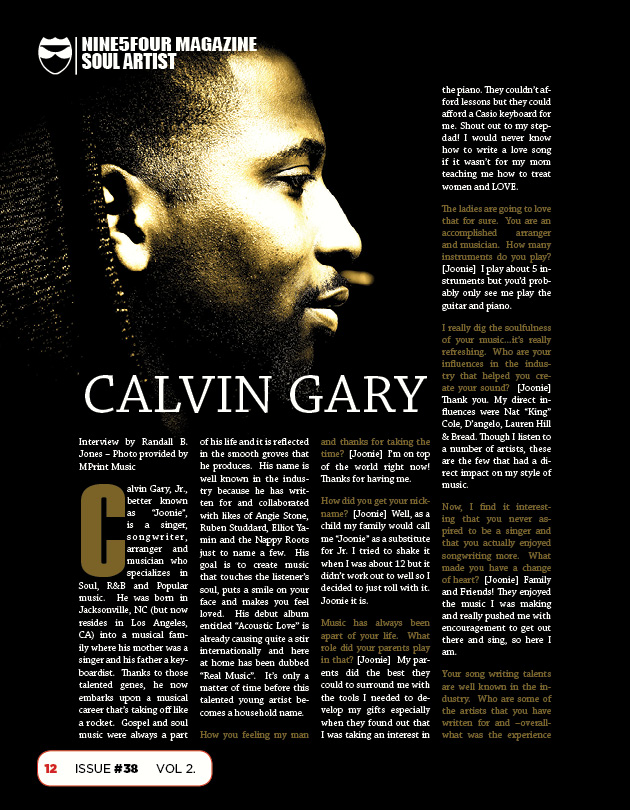 Calvin Gary, Jr., better known as “Joonie”, is a singer, songwriter, arranger and musician who specializes in Soul, R&B and Popular music. He was born in Jacksonville, NC (but now resides in Los Angeles, CA) into a musical family where his mother was a singer and his father a keyboardist. Thanks to those talented genes, he now embarks upon a musical career that’s taking off like a rocket. Gospel and soul music were always a part of his life and it is reflected in the smooth groves that he produces. His name is well known in the industry because he has written for and collaborated with likes of Angie Stone, Ruben Studdard, Elliot Yamin and the Nappy Roots just to name a few. His goal is to create music that touches the listener’s soul, puts a smile on your face and makes you feel loved. His debut album entitled “Acoustic Love” is already causing quite a stir internationally and here at home has been dubbed “Real Music”. It’s only a matter of time before this talented young artist becomes a household name.

How you feeling my man and thanks for taking the time? [Joonie] I’m on top of the world right now! Thanks for having me.

How did you get your nickname? [Joonie] Well, as a child my family would call me “Joonie” as a substitute for Jr. I tried to shake it when I was about 12 but it didn’t work out to well so I decided to just roll with it. Joonie it is.

Music has always been apart of your life. What role did your parents play in that? [Joonie] My parents did the best they could to surround me with the tools I needed to develop my gifts especially when they found out that I was taking an interest in the piano. They couldn’t afford lessons but they could afford a Casio keyboard for me. Shout out to my stepdad! I would never know how to write a love song if it wasn’t for my mom teaching me how to treat women and LOVE.

The ladies are going to love that for sure. You are an accomplished arranger and musician. How many instruments do you play? [Joonie] I play about 5 instruments but you’d probably only see me play the guitar and piano.

I really dig the soulfulness of your music…it’s really refreshing. Who are your influences in the industry that helped you create your sound? [Joonie] Thank you. My direct influences were Nat “King” Cole, D’angelo, Lauren Hill & Bread. Though I listen to a number of artists, these are the few that had a direct impact on my style of music.

Now, I find it interesting that you never aspired to be a singer and that you actually enjoyed songwriting more. What made you have a change of heart? [Joonie] Family and Friends! They enjoyed the music I was making and really pushed me with encouragement to get out there and sing, so here I am.

Your song writing talents are well known in the industry. Who are some of the artists that you have written for and –overall- what was the experience like working with them? [Joonie] I’ll name two... Elliott Yamin and Angie Stone. They’re both two extremely talented and easy to work with people.

Talk to me about how you hooked up with Warren G and how that lead to your first recording deal.
[Joonie] I was working at a music store in Seattle WA, where a customer of mine asked if he could get my production demo over to Warren. Warren heard the CD and reached out to me. I didn’t jump at the opportunity immediately but with some time we worked out a good agreement, met with his brother Dre, Snoop, Elektra, Atlantic, Jive etc. I ended up signing with Elektra.

Are you still currently signed with Elektra? [Joonie] I partnered my company “Wiz Kid Music” with “Hitclub Entertainment” to release my 1st album “Acoustic Love”. Kenny Bereal and the Hitclub staff are a great group of people who have been helping tremendously on this campaign to get my music to the masses. I create the music and they help get it in your hands.

Let’s get into your album “Acoustic Love” that’s creating such a buzz for you right now. What does this CD have in store for the listeners? [Joonie] It’s a soulful, edgy yet raw album that will definitely go down as a timeless record in your cd collection. The album defines love in every way.

Again, the ladies are going to love that!! People…if you are a fan of soul music…this is the CD to get! It’s perfect for traveling, chilln’ with that special someone, cleaning the house or just having some good friends over…IT’S THAT GOOD! Was this your goal when creating this album? [Joonie] Thanks! In all honesty, a lot of the songs were made for my own listening pleasure. I didn’t expect for anyone to be cleaning their house to it or having a bubble bath with a glass of champagne while playing it. But hey…it worked out great for everyone!

Is your music currently getting radio airplay? [Joonie] We’re working hard on getting radio to pick up on it however I’m getting lots of love from internet radio and international feeds. I haven’t had anything but positive feedback so far!

This CD is garnering you international attention as well. I’m hearing that Japan is showing you much love. How does that make you feel? [Joonie] It makes me feel great knowing that my music touches people of different nationalities. It’s a good sign of longevity.

I agree with you 100%. And the UK is really jocking you hard! Talk to me about being named the #1 selling artist for the UK’s Breaking Artist Distro. [Joonie] I’m just honored... I’m a strong believer in the saying, “nothings ever promised.” And with that said, I take any recognition as humbly as I possibly can.

I caught your music video for your first single “SO FLY”. Great song and very nice work on the video. I have to ask, were you and long time friend Elliot Yamin (of American Idol fame) trying to do the Kid-N-Play 2-step at the end of the video…lol??? [Joonie] Lol!! We just couldn’t seem to get it locked in! We practiced that for weeks!! Lol…just kidding!

One of your songs “Sunshine” is being featured in the BET movie “I DO, I DID” (funny movie with interesting concept). How did this opportunity come about for you? [Joonie] Well I was presented with the opportunity to submit some songs for the movie and they enjoyed not only “Sunshine” but a lot of the songs you hear on my album “Acoustic Love”.

I know that you look at each of your songs as one of your kids. But, which song is YOUR favorite or has extra meaning behind it? [Joonie] No favorites but I’ll find myself listening to a different song more than the rest on a monthly bases and right now “You Got Me” is on repeat.

Do you have any upcoming performances to let the readers know when and where they can catch you “LIVE”? [Joonie] You can get my performance information at www.jooniezone.com.

And let them know where they can purchase “Acoustic Love” and how they can keep up with your career. [Joonie] My album “Acoustic Love” is available on iTunes, Amazon.com and www.joonie.bandcamp.com. Stay in touch with me at www.facebook.com/jooniesmusic and www.twitter.com/jooniezone .

What can we expect from Joonie in the very near future? [Joonie] You can expect to hear more of me!

It was a real pleasure speaking with you Joonie. Stay true to yourself and keep making that “Feel Good” music because we ALL needed it right now (I’ll be looking for my hardcopy from you soon.) Lol! [Joonie] Lol! Thanks for your support ladies and gents. Make sure you spread the word and share my music and sites…you know why?...because friends don’t let friends miss out on great music! Take care.

Tweet
More in this category: « Miraj 2011 Tranea Cannon »
back to top
Current Issue