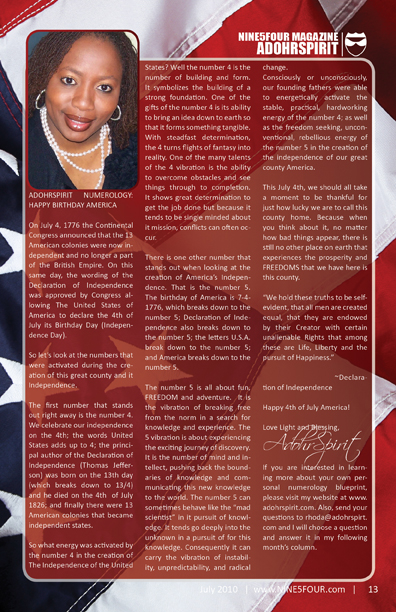 On July 4, 1776 the Continental Congress announced that the 13 American colonies were now independent and no longer a part of the British Empire. On this same day, the wording of the Declaration of Independence was approved by Congress allowing The United States of America to declare the 4th of July its Birthday Day (Independence Day).

So let’s look at the numbers that were activated during the creation of this great county and it Independence.

The first number that stands out right away is the number 4. We celebrate our independence on the 4th; the words United States adds up to 4; the principal author of the Declaration of Independence (Thomas Jefferson) was born on the 13th day (which breaks down to 13/4) and he died on the 4th of July 1826; and finally there were 13 American colonies that became independent states.

So what energy was activated by the number 4 in the creation of The Independence of the United States? Well the number 4 is the number of building and form. It symbolizes the building of a strong foundation. One of the gifts of the number 4 is its ability to bring an idea down to earth so that it forms something tangible. With steadfast determination, the 4 turns flights of fantasy into reality. One of the many talents of the 4 vibration is the ability to overcome obstacles and see things through to completion. It shows great determination to get the job done but because it tends to be single minded about it mission, conflicts can often occur.

The number 5 is all about fun, FREEDOM and adventure. It is the vibration of breaking free from the norm in a search for knowledge and experience. The 5 vibration is about experiencing the exciting journey of discovery. It is the number of mind and intellect, pushing back the boundaries of knowledge and communicating this new knowledge to the world. The number 5 can sometimes behave like the “mad scientist” in it pursuit of knowledge. It tends go deeply into the unknown in a pursuit of for this knowledge. Consequently it can carry the vibration of instability, unpredictability, and radical change.

Consciously or unconsciously, our founding fathers were able to energetically activate the stable, practical, hardworking energy of the number 4; as well as the freedom seeking, unconventional, rebellious energy of the number 5 in the creation of the independence of our great county America.

This July 4th, we should all take a moment to be thankful for just how lucky we are to call this county home. Because when you think about it, no matter how bad things appear, there is still no other place on earth that experiences the prosperity and FREEDOMS that we have here is this county.

“We hold these truths to be self-evident, that all men are created equal, that they are endowed by their Creator with certain unalienable Rights that among these are Life, Liberty and the pursuit of Happiness.”

If you are interested in learning more about your own personal numerology blueprint, please visit my website at www.adohrspirit.com. Also, send your questions to This email address is being protected from spambots. You need JavaScript enabled to view it. and I will choose a question and answer it in my following month’s column.