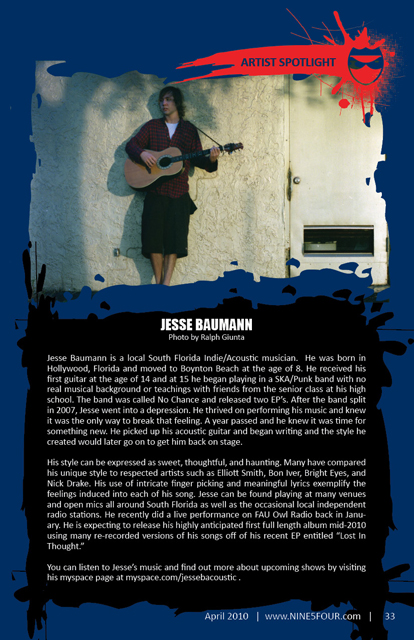 Jesse Baumann is a local South Florida Indie/Acoustic musician. He was born in Hollywood, Florida and moved to Boynton Beach at the age of 8. He received his first guitar at the age of 14 and at 15 he began playing in a SKA/Punk band with no real musical background or teachings with friends from the senior class at his high school. The band was called No Chance and released two EP’s. After the band split in 2007, Jesse went into a depression. He thrived on performing his music and knew it was the only way to break that feeling. A year passed and he knew it was time for something new. He picked up his acoustic guitar and began writing and the style he created would later go on to get him back on stage.

His style can be expressed as sweet, thoughtful, and haunting. Many have compared his unique style to respected artists such as Elliott Smith, Bon Iver, Bright Eyes, and Nick Drake. His use of intricate finger picking and meaningful lyrics exemplify the feelings induced into each of his song. Jesse can be found playing at many venues and open mics all around South Florida as well as the occasional local independent radio stations. He recently did a live performance on FAU Owl Radio back in January. He is expecting to release his highly anticipated first full length album mid-2010 using many re-recorded versions of his songs off of his recent EP entitled “Lost In Thought.”

You can listen to Jesse’s music and find out more about upcoming shows by visiting his myspace page at myspace.com/jessebacoustic.

Tweet
More in this category: « Nominee STARTED FROM THE BOTTOM: MARCUS AMAYA »
back to top
Current Issue