Mz. E Baby: Self Made 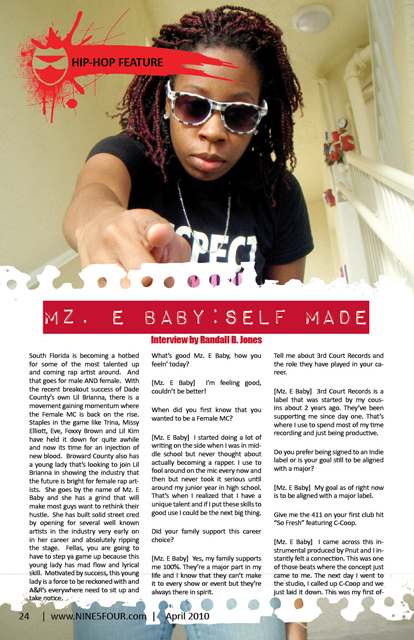 South Florida is becoming a hotbed for some of the most talented up and coming rap artist around. And that goes for male AND female. With the recent breakout success of Dade County’s own Lil Brianna, there is a movement gaining momentum where the Female MC is back on the rise. Staples in the game like Trina, Missy Elliott, Eve, Foxxy Brown and Lil Kim have held it down for quite awhile and now its time for an injection of new blood. Broward County also has a young lady that’s looking to join Lil Brianna in showing the industry that the future is bright for female rap artists. She goes by the name of Mz. E Baby and she has a grind that will make most guys want to rethink their hustle. She has built solid street cred by opening for several well known artists in the industry very early on in her career and absolutely ripping the stage. Fellas, you are going to have to step ya game up because this young lady has mad flow and lyrical skill. Motivated by success, this young lady is a force to be reckoned with and A&R’s everywhere need to sit up and take notice.

When did you first know that you wanted to be a Female MC?

[Mz. E Baby] I started doing a lot of writing on the side when I was in middle school but never thought about actually becoming a rapper. I use to fool around on the mic every now and then but never took it serious until around my junior year in high school. That’s when I realized that I have a unique talent and if I put these skills to good use I could be the next big thing.

Did your family support this career choice?

[Mz. E Baby] Yes, my family supports me 100%. They’re a major part in my life and I know that they can’t make it to every show or event but they’re always there in spirit.

Tell me about 3rd Court Records and the role they have played in your career.

[Mz. E Baby] 3rd Court Records is a label that was started by my cousins about 2 years ago. They’ve been supporting me since day one. That’s where I use to spend most of my time recording and just being productive.

Do you prefer being signed to an Indie label or is your goal still to be aligned with a major?

[Mz. E Baby] My goal as of right now is to be aligned with a major label.

Give me the 411 on your first club hit “So Fresh” featuring C-Coop.

[Mz. E Baby] I came across this instrumental produced by Pnut and I instantly felt a connection. This was one of those beats where the concept just came to me. The next day I went to the studio, I called up C-Coop and we just laid it down. This was my first official single that I released as an artist and this single really set my career off.

This song put you on the map. You went on to perform the song at several colleges and festivals. What was the feedback like from the crowd on hand?

[Mz. E Baby] When I first performed this song I was nervous as usual, lol. But once the beat drop and that spotlight was on me…I transformed! The crowd loved it! I feel that a performance isn’t really about the song it’s more about how you deliver the lyrics and I make sure I go hard each and every time I step foot on that stage.

Explain to me your unique style of talent that you said you have and how this makes you a one of a kind rapper.

[Mz. E Baby] I’m putting in overtime and grinding hard each and every day, doing what I have to do to get my name out there. Staying focused, giving my all every time no matter what the situation is. I’m just staying positive and dedicated to the music. You ask me to give 100%, I’ll give you 200%, no matter if it’s in the studio or on stage, I’m going in! A lot of artists think that everything is going to come to them but you have to go out there and get it. I’m aiming for the top.

You definitely have the right focus mixed with passion. From your single receiving a lot of buzz, you went on to open for artist the likes of Casley, Trill Entertainment, Ruin & Lil Boosie. How did those opportunities come about and what did you learn from those experiences?

[Mz. E Baby] The Casely show, I actually walked into that situation blind. It was a Music Conference where I knew I was going to be performing but I didn’t know that Casely was going to be there and that I was actually going to be opening up for him. The Lil’ Boosie show, now that was amazing. One of those shows I will NEVER forget! I never imagined that I would have an opportunity to open up for a major artist such as Boosie so early in my career. With me being a new artist to the game, I was blessed to be giving that chance.

What type of feedback from the streets did you get from your first mixtape release entitled “Access Granted”?

[Mz. E Baby] Access Granted was my first mixtape. It was more like an appetizer to let the world know that I’m here. It was only released online and I was pretty shocked with the feedback that I received. Nothing but love and I appreciate everyone who took time out their day to listen.

Talk to me about your promotion team “Skool Gang Fresh” and how they contributed to your current success.

[Mz. E Baby] I started Skool Gang Fresh (SGF) my freshman year in college. It was my support team/street team. I wanted to put together a team that was looking to help me out as an independent artist. They contributed by passing out flyers, cds, and putting up posters.

Do you feel female rappers get the same respect from the industry as their male counterparts? Why?

[Mz. E Baby] Yes and No. I feel that the majority of the industry looks at us as just a female and prejudge our talents before they hear what we have to offer. But what they fail to understand is that we take this just as serious as male rappers. As a matter of fact, I feel that I have accomplished more than your average male rapper and I put on twice as hard and that’s where the respect kicks in. As far as my lyrics and style goes, I’m getting respect and support because I’m that female that’s out here doing my thing.

What would you change or implement in the industry if you had the chance to do so?

[Mz. E Baby] There shouldn’t be a gender on talent and the industry is overlooking the talented female artists that are trying to make way in the music industry.

Let the readers know what they can expect from your new project entitled “Self Made”?

[Mz. E Baby] “Self-Made” is going to be my best work yet! I have been putting in blood, sweat, and tears, literally into this project. This will be my first mixtape dropping this year and they can expect some club hits, street bangers, and a few surprises. Stay tuned.

You have crazy flow; over a million plays & views on Myspace; stage performance experience; a strong promotional team in place and an Indie label backing you. What more do you think you have to do to make the industry take notice?

WOOOOW, that’s not a typical response. You made no excuses…just Grind Harder…I’m feeln’ that! Are there any other hobbies or interest that you have people don’t know about?

Who in the industry would you most like to collabo with and why?

[Mz. E Baby] I would love to work with Shawnna. I have always looked up to her as a female rapper. Her delivery is stupid and her rhymes go hard.

Let the readers know where to go to cop your music and to get at you.

[Mz. E Baby] My music can be found on iTunes, Amazon, and Rhapsody. Also at www.myspace.com/mzebaby, www.twitter.com/mzebaby, and www.facebook.com/mzebaby

I’ve listened to your music and you are definitely one of the hottest rappers out of Broward County. Stay on your grind and keep pushing. Your big break is just around the corner. Take a moment here to recognize the people that have supported your career.

[Mz. E Baby] Thanks....First and foremost I would like to give a shout out to the fans. Next, my loving and supportive family and of course God for blessing me with my talent. Everyone who supports Mz. E!! Deerfield, my home team and the whole Broward County movement. I appreciate all the love and support!