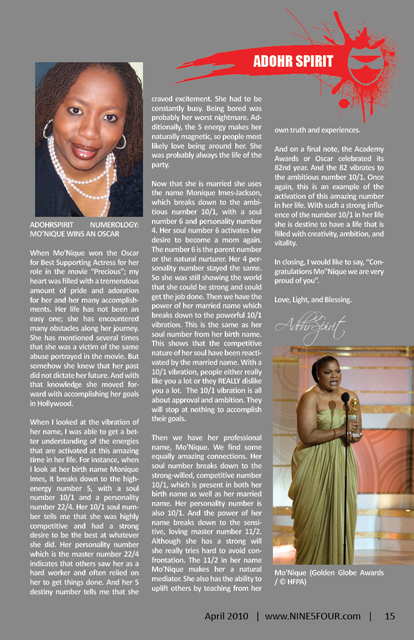 When Mo’Nique won the Oscar for Best Supporting Actress for her role in the movie “Precious”; my heart was filled with a tremendous amount of pride and adoration for her and her many accomplishments. Her life has not been an easy one; she has encountered many obstacles along her journey. She has mentioned several times that she was a victim of the same abuse portrayed in the movie. But somehow she knew that her past did not dictate her future. And with that knowledge she moved forward with accomplishing her goals in Hollywood.

When I looked at the vibration of her name, I was able to get a better understanding of the energies that are activated at this amazing time in her life. For instance, when I look at her birth name Monique Imes, it breaks down to the high-energy number 5, with a soul number 10/1 and a personality number 22/4. Her 10/1 soul number tells me that she was highly competitive and had a strong desire to be the best at whatever she did. Her personality number which is the master number 22/4 indicates that others saw her as a hard worker and often relied on her to get things done. And her 5 destiny number tells me that she craved excitement. She had to be constantly busy. Being bored was probably her worst nightmare. Additionally, the 5 energy makes her naturally magnetic, so people most likely love being around her. She was probably always the life of the party.

Now that she is married she uses the name Monique Imes-Jackson, which breaks down to the ambitious number 10/1, with a soul number 6 and personality number 4. Her soul number 6 activates her desire to become a mom again. The number 6 is the parent number or the natural nurturer. Her 4 personality number stayed the same. So she was still showing the world that she could be strong and could get the job done. Then we have the power of her married name which breaks down to the powerful 10/1 vibration. This is the same as her soul number from her birth name. This shows that the competitive nature of her soul have been reactivated by the married name. With a 10/1 vibration, people either really like you a lot or they REALLY dislike you a lot. The 10/1 vibration is all about approval and ambition. They will stop at nothing to accomplish their goals.

Then we have her professional name, Mo’Nique. We find some equally amazing connections. Her soul number breaks down to the strong-willed, competitive number 10/1, which is present in both her birth name as well as her married name. Her personality number is also 10/1. And the power of her name breaks down to the sensitive, loving master number 11/2. Although she has a strong will she really tries hard to avoid confrontation. The 11/2 in her name Mo’Nique makes her a natural mediator. She also has the ability to uplift others by teaching from her own truth and experiences.

And on a final note, the Academy Awards or Oscar celebrated its 82nd year. And the 82 vibrates to the ambitious number 10/1. Once again, this is an example of the activation of this amazing number in her life. With such a strong influence of the number 10/1 in her life she is destine to have a life that is filled with creativity, ambition, and vitality.

In closing, I would like to say, “Congratulations Mo”Nique we are very proud of you”.

Tweet
More in this category: « Adohrspirit Numerology: Sandra Bullock America’s Sweetheart AdohrSpirit: And The SAINTS Came Marching In »
back to top
Current Issue