AdohrSpirit: And The SAINTS Came Marching In 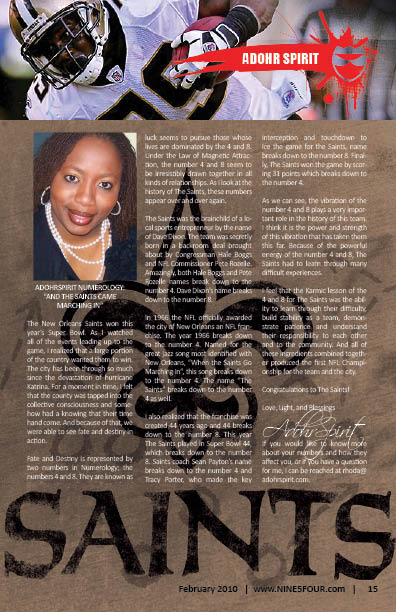 ADOHRSPIRIT NUMEROLOGY: “AND THE SAINTS CAME MARCHING IN”

The New Orleans Saints won this year’s Super Bowl. As I watched all of the events leading up to the game, I realized that a large portion of the country wanted them to win. The city has been through so much since the devastation of hurricane Katrina. For a moment in time, I felt that the county was tapped into the collective consciousness and somehow had a knowing that their time hand come. And because of that, we were able to see fate and destiny in action.

Fate and Destiny is represented by two numbers in Numerology; the numbers 4 and 8. They are known as the “Numbers of Karma” and hard luck seems to pursue those whose lives are dominated by the 4 and 8. Under the Law of Magnetic Attraction, the number 4 and 8 seem to be irresistibly drawn together in all kinds of relationships. As I look at the history of The Saints, these numbers appear over and over again.

I feel that the Karmic lesson of the 4 and 8 for The Saints was the ability to learn through their difficulty, build stability as a team, demonstrate patience and understand their responsibility to each other and to the community. And all of these ingredients combined together produced the first NFL Championship for the team and the city.

Congratulations to The Saints!

If you would like to know more about your numbers and how they affect you, or if you have a question for me, I can be reached at This email address is being protected from spambots. You need JavaScript enabled to view it..