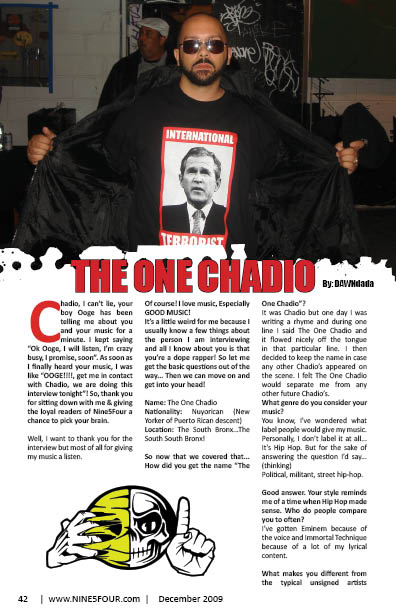 Chadio, I can’t lie, your boy Ooge has been telling me about you and your music for a minute. I kept saying “Ok Ooge, I will listen, I’m crazy busy, I promise, soon”. As soon as I finally heard your music, I was like “OOGE!!!!, get me in contact with Chadio, we are doing this interview tonight”! So, thank you for sitting down with me & giving the loyal readers of Nine5Four a chance to pick your brain.

Well, I want to thank you for the interview but most of all for giving my music a listen.

Of course! I love music, Especially GOOD MUSIC! It’s a little weird for me because I usually know a few things about the person I am interviewing and all I know about you is that you’re a dope rapper! So let me get the basic questions out of the way... Then we can move on and get into your head!

So now that we covered that... How did you get the name “The One Chadio”? It was Chadio but one day I was writing a rhyme and during one line I said The One Chadio and it flowed nicely off the tongue in that particular line. I then decided to keep the name in case any other Chadio’s appeared on the scene. I felt The One Chadio would separate me from any other future Chadio’s.

What genre do you consider your music? You know, I’ve wondered what label people would give my music. Personally, I don’t label it at all...It’s Hip Hop. But for the sake of answering the question I’d say...(thinking) Political, militant, street hip-hop.

Good answer. Your style reminds me of a time when Hip Hop made sense. Who do people compare you to often? I’ve gotten Eminem because of the voice and Immortal Technique because of a lot of my lyrical content.

What makes you different from the typical unsigned artists arriving on the scene today? Well, I have been fortunate enough to experience the ugly side of the music industry by being around it for a while. Also, my frame of mind is different. I am not looking to get rich from my music. Honestly, it’s therapeutic for me and it’s something I love to do. I want to be heard and more importantly I want to create music that is respected and represents hip-hop while sometimes speaking about important issues.

How long have you been rapping & what made you want to be a rapper? Being from The South Bronx hip-hop is in my blood. I am a product of the Mecca of hip-hop...You can’t escape it because it’s part of your culture growing up in The Bronx. It’s like being born and raised in Puerto Rico and trying to deny the Puerto Rican culture...You can’t. It will be all around you and will permeate your soul eventually. In my case, I never tried to deny it. It was part of my entire childhood and I wouldn’t have it any other way. I have been an MC for the better part of my life.

Who influenced you musically? Earth, Wind and Fire, Bob Marley, Boogie Down Productions, Public Enemy. I mean it’s hard to name a few. I’m pretty diverse. I love me some Hector Lavoe, New Birth, Billy Joel, Elton John, Bjork, Portishead, old school hip hop like Grandmaster Flash and the Furious 5. Any music that I have “felt’ while listening to it I would say is influential to me.

Do you have any other talents in the music field? I have tried my hand at producing but my true love is writing and recording. It’s like putting a puzzle together and the end result is the most satisfying part of the process.

What influenced your concept of your anticipated album: Internal Insurgency? Lately, I have felt an uprising within my soul. Musically, I feel it. I mean, you have the first half of the album being pure street hip-hop and the second half being the militant, political side of me. As an individual I am always aware of what is going on internationally...Being aware locally is good but knowing what’s going on at the other side of the planet is just as important if not more important. There is an insurgency brewing inside of me and where it will take me I have no idea. All I know is it is producing passionate music from me and with that I am pleased.

What artists & producers did you work with in the creation of this masterpiece? I wrote and performed each song myself, without any guest appearances. I would love to collab with a couple of artists on my next album but I didn’t want that for this album. The producers I worked with were Dmano, Steven Keng and EQ. They are official producers and I would work with them again in a heartbeat. They saw my vision and gave me what I needed musically. Also, my man Ooge of the all nightas. Ooge is the one who completed my album cover. His artwork is incredible! I gave him an idea and he saw my vision. Actually, he took my vision and enhanced on it tenfold. The album cover will give you chills! All you have to do is remember the name of the album is Internal Insurgency and then look at the album cover...enough said.

When can we expect the release? The album is available on iTunes now. I am working on getting some hard copies pressed up because I know some people still want that CD in their hands. I would say the hard copies will be available in January 2010.

What artists would you like to work with in the future? I would love to work with KRSONE, Joell Ortiz, Immortal Technique, The Roots, Mos Def, Dead Prez and others. There are so many dope M.C.’s and I wouldn’t mind working with any of those M.C.’s.

What established producer beats do you favor the most? DJ Premier...Preemo has always been one of my favorites and I would love to work with him.

Has your family supported your rap dreams? Yes they have. As a matter of fact my wife, moms, brother, cousins and most everyone else in my family have supported my musical aspirations.

Where do you hope to see The One Chadio in 1 year? I hope to see myself releasing my second album but most of all I hope to be in the process of building an educational or medical facility in one of those extremely impoverished areas on the globe. That is a goal of mine and all the proceeds from my first album will hopefully help me attain that goal. As we speak, I am thinking Haiti or Afghanistan but I am open to other suggestions because it’s only in the beginning stages right now.

Who do you attribute your current successes to? All praise is due to the higher power. My earth angels are my mother and wife as well as my kids, who just by being able to look at them and spend time with them, give me the power to fight on in all that I do. I thank God for them because they keep me focused. My brother too because when it comes to discussing world events there is nobody I would talk to before him. Our talks are an inspiration for some of my tracks.

Well Chadio thanks for giving me your time. Any shout outs? Thank you and I want to shout out you DAWNdada and Nine5Four Magazine. Also want to shout my team EQ, Dmano, Butta Rob, Jimmy Graphics, Louie167, Ooge, Steven Keng and my brother Khattab for assisting me with whatever I needed. This team is truly my dream team!

Tweet
More in this category: « Swazy Styles "Sounds like MONEY" Vito or Die »
back to top
Current Issue