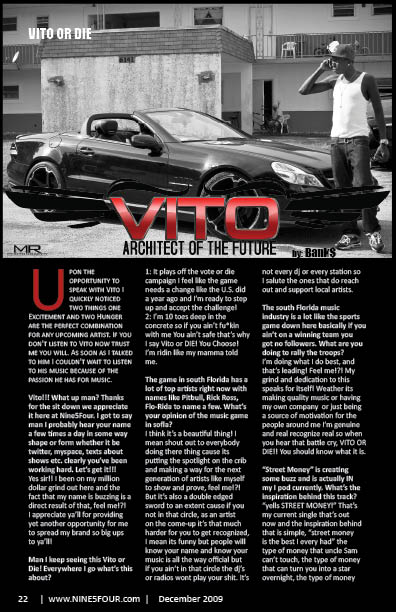 Upon the opportunity to speak with Vito I quickly noticed two things one Excitement and two Hunger are the perfect combination for any upcoming artist. If you don’t listen to Vito now trust me you will. As soon as I talked to him I couldn’t wait to listen to his music because of the passion he has for music.

Vito!!! What up man? Thanks for the sit down we appreciate it here at Nine5Four. I got to say man I probably hear your name a few times a day in some way shape or form whether it be twitter, myspace, texts about shows etc. clearly you’ve been working hard. Let’s get it!!! Yes sir!! I been on my million dollar grind out here and the fact that my name is buzzing is a direct result of that, feel me!?! I appreciate ya’ll for providing yet another opportunity for me to spread my brand so big ups to ya’ll!

Man I keep seeing this Vito or Die! Everywhere I go what’s this about? 1: It plays off the vote or die campaign I feel like the game needs a change like the U.S. did a year ago and I’m ready to step up and accept the challenge! 2: I’m 10 toes deep in the concrete so if you ain’t fu*kin with me You ain’t safe that’s why I say Vito or DIE! You Choose! I’m ridin like my mamma told me.

The game in south Florida has a lot of top artists right now with names like Pitbull, Rick Ross, Flo-Rida to name a few. What’s your opinion of the music game in sofla? I think it’s a beautiful thing! I mean shout out to everybody doing there thing cause its putting the spotlight on the crib and making a way for the next generation of artists like myself to show and prove, feel me!?! But it’s also a double edged sword to an extent cause if you not in that circle, as an artist on the come-up it’s that much harder for you to get recognized, I mean its funny but people will know your name and know your music is all the way official but if you ain’t in that circle the dj’s or radios wont play your shit. It’s not every dj or every station so I salute the ones that do reach out and support local artists.

The south Florida music industry is a lot like the sports game down here basically if you ain’t on a winning team you got no followers. What are you doing to rally the troops? I’m doing what I do best, and that’s leading! Feel me!?! My grind and dedication to this speaks for itself! Weather its making quality music or having my own company or just being a source of motivation for the people around me I’m genuine and real recognize real so when you hear that battle cry, VITO OR DIE!! You should know what it is.

It also has a video where can our readers see it at? Where can they hear your music? Yea the Street Money video HD video is anywhere and everywhere that has an internet connection, 24hourhiphop.com, the305.com, to name a few! And once we get that green light it’s going to be on your favorite TV. show ya feel meh!?!

Did you have any say in the concept of the video? I wrote the treatment for the video and co-directed it with Drefilms who brought me vision to life. So yea I was definitely hands one with it, it was a beautiful collaboration.

Where was it shot? It was shot in both Broward and Dade, the first part was my old neighborhood in Miramar in front of the building I lived in for years in a one bedroom with two other heads(Swaab what it look like!?!) So that is real life you see when you watch the video. The second part was shot in downtown Miami.

Music is saturated with people saying the same thing. What about your music is different? You right the game is saturated with a bunch of carbon copies, and for the most part I understand that hip-hop is an outlet for a generation that for the most part see the same shit and go through the same struggles but I feel how you TELL you side of things is what sets you apart. My music is a reflection of my life both Good and bad, happy and sad the best of times and the worst of time so when I express that its genuine and I feel like that’s the difference in my music. Not to mention I’m at home in any musical lane! From hard-core to pop.

Your parents both had jobs that basically kept them from home. You said you got really involved in the street life. How were you able to turn it around? Real talk my mother tried hard with me but she just had her own obligations and it doesn’t make her a bad mother, matter of fact, she wasn’t there because she was grinding to provide a better life for us but in her absence I fell victim to the darker side of life. The drugs, the violence just that fast life but I always had this thing with music, everyday of every week of every year for as long as I can remember music was in my life so it was a natural transition for me to be involved with music.

So it wasn’t until high school that you first ever spit in front of a crowd. What was going through your mind when your boy put you on the spot? What was there reaction like? I just remember being mad at him like “are you serious right now?” but then something kicked in and I was like fuck it, I’m going in and I that’s what I did. When I was done everybody gave me props and from that day on I was that dude in them M.H.S hallways...

Your sound reminds me of Juelz Santana who are some artists that inspire you? “smiles” I never heard that comparison before but I like Juelz music so it’s all good! But I’m inspired by just great music in any capacity homie, it doesn’t matter what type of music, it could be Louis on the trumpet of Jay-Z over some 808’s great music is an inspiration in itself, feel me?

What are some other avenues we can find Vito involved in? I’m trying to be everywhere to be honest. I’m trying to put my hands in anything moving. But right now I’m in some clothing lines, most notably FACA CLOTHING which is owned by two Croatian brothers and is super fly, the definitely keep fresh. Also got the VITO VIXENS in the works which will be a platform for up and coming as well as established models to network and build their brand. And of course at the core of everything is the music. Just look out for that Grammy music from me and my camp.

If you didn’t have the possibility of making money would you still make music? I will make music until God comes to get me! It’s been deeper than rap, it real love and a real passion for this. . .

Do you want to be signed to label or would you rather do your own thing? I’ve always been the stand up type so I would rather do me. I not saying I would never sign to a major label but distribution is my first option.

Let’s say you make a million from your music what’s the first thing you do with it? Snatch my niggas and go double it!

We always ask this here what’s in your IPOD right now? I’ll be honest with you I got an IPOD but I never use it I keep all my music in my Black Berry, that way my music is always a hand reach away, but I got all kinds of stuff in there but it’s mostly me! And of course beats.

What are some requirements when you head into the booth? All I need is my lights low and my mic loud! I don’t need no extra “help”, but once I’m done I might crack the Henny and roll one!

Shout outs: Shout outs to everybody that has been supporting and continue to support my music. Big ups to my Swaab Niggas, My broward niggas, the whole Dade county, FACA clothing, Drefilms what it look like. 3 stars, G.T.E, Mixing Lounge Studios (Mckoy I see ya), big ups to nine 5 four magazine for this opportunity and a special shout out to greatness cause I’m on my way!! Tell em it’s VITO OR DIE…yahhhh

Tweet
More in this category: « The One Chadio Steff Nasty of the BeatBanggahz »
back to top
Current Issue