Steff Nasty of the BeatBanggahz 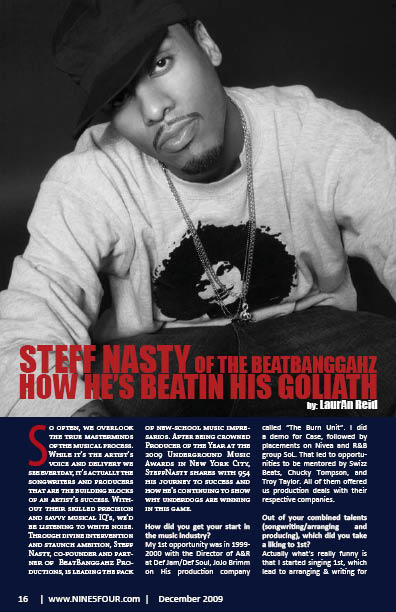 How He’s Beatin His Goliath

So often, we overlook the true masterminds of the musical process. While it’s the artist’s voice and delivery we see everyday, it’s actually the songwriters and producers that are the building blocks of an artist’s success. Without their skilled precision and savvy musical IQ’s, we’d be listening to white noise. Through divine intervention and staunch ambition, Steff Nasty, co-founder and partner of BeatBanggahz Productions, is leading the pack of new-school music impresarios. After being crowned Producer of the Year at the 2009 Underground Music Awards in New York City, SteffNasty shares with 954 his journey to success and how he’s continuing to show why underdogs are winning in this game.

How did you get your start in the music industry? My 1st opportunity was in 1999-2000 with the Director of A&R at Def Jam/Def Soul, JoJo Brimm on His production company called “The Burn Unit”. I did a demo for Case, followed by placements on Nivea and R&B group SoL. That led to opportunities to be mentored by Swizz Beats, Chucky Tompson, and Troy Taylor. All of them offered us production deals with their respective companies.

Out of your combined talents (songwriting/arranging and producing), which did you take a liking to 1st? Actually what’s really funny is that I started singing 1st, which lead to arranging & writing for artists. All the skills I learned to this point make me a well-rounded and efficient producer. I co-wrote my school’s song and won 3rd place in a city-wide songwriting competition sponsored by BMG records. I earned a scholarship from that, which I used 2 major in Piano Performance & Audio Engineering.

The placement many people know you for is Trey Songz’s”In The Middle”. How did that connection come to be? That came to be through a relationship I had with Troy Taylor, CEO of Songbook Entertainment. Before meeting Trey, I had worked with Troy on a few projects for Jhene and Kenny Lattimore. We did a lot of demos with Trey that helped him get his buzz up and landed him the deal with Atlantic. I was actually inspired to compose that song after hearing Gordon Chambers‘ record, “Can I Touch You There”. Trey’s “In The Middle” was actually very important for us because it gave our brand a lot of credibility and respect. Even though it wasn’t released commercially as a single, it was and still is a fan favorite.

Who were/are some of your favorite producers and songwriters in the game? Some current producers I really like are Stargate, Bryan-Michael Cox, Tricky Stewart, Rich Harrison, Oak, Eric Hudson & D’mile. I tend to gravitate towards producers that can actually play an instrument, do vocal production and arrange. They usually make better music and songs in my opinion. As far as songwriters, I like Makeba Riddick, Ne-Yo, Adonis Shropshire, James Fauntleroy, TC, The Dream, and Claude Kelly.

Having a partner is a great push, so in the creative process, what comes 1st: the beat or the words? It really varies. Usually the beat comes first and I’ll arrange music to compliment the beat my partner lays down. But as of lately, I’ve been really into composing records and making the music more melody-driven. I believe great melodies are timeless and will inspire better songs. In this time of the recession and problems in the music industry, I believe we as creators can be more responsible in making music. Have more urgency and focus on making great songs that will touch people and evoke some type of emotion rather then making a beat that will only temporarily get you success. Plus, great music will inspire a great story! So lets push the bar!

What is 1 of your favorite BeatBanggahz-produced records? Why? That’s a tough question!!! Man, we have done so many songs over the years. Some of them include “Window Shopping” by Trey Songz & Ezekiel Lewis from the Clutch. We produced that with Troy. That song got us a lot of attention in the music industry and created a huge buzz for Beatbanggahz and Trey. Quite a few industry execs wanted 2 sign Trey after hearing that song.

“Dirty Little Trick” which we produced and was written by Claude Kelly. That song actually made its away around the entire music industry as well & got us a meeting with Jay-Z & TyTy! It was recorded & performed by MBK/J-Records act, Black Buddafly.

You won the Producer of the Year Awards at the 2009 UMAs, what did that award mean to you? That award let me know that regardless of your situation, God is bigger than it. It showed me that if you really believe in God and believe in his blessings and his promise to give you the desires of your heart, it will come to pass. 9th Wonder, Hi Tek, Jake One, Sha Stimuli and Illmind all technically have more music out and though BeatBanggahz have been around for a while, we were definitely the underdogs in that situation. We didn’t have any current placements or singles out; so not only were we nominated, we defeat producers who [on paper] should have won. It’s a new day and there are other factors that are important and relevant to marketing yourself as a successful brand other than just placements. We are an excellent example of that.

What can we look forward to from SteffNasty and the BeatBanggahz brand? You can look forward to the Video blog series “A Day in the Life of a Music Producer”. That’s something that I really enjoy doing, its like a documentary of the creative process from a very raw, real and educational point of view. It’s something that has become a great vehicle for us to have our work heard, allow new potential clients and collaborators to see how we work and also document our journey for personal reasons.

We are also going to start signing artists, writers, producers to our company where we will develop, market and promote them as well as provide opportunities to do domestic and international record deals, licensing deals and work on different projects. The BeatBanggahz brand is limitless and I’d pushing for it to be synonymous with quality, integrity and perfection.