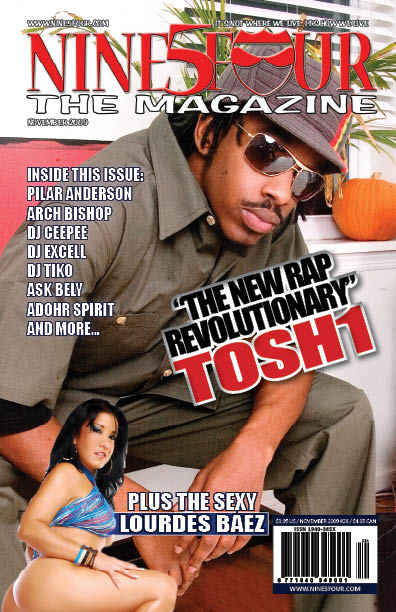 Hip Hop is about to be taken to task by a young man out of Boston, Mass by way of Kingston, Jamaica. He is thoroughly displeased at what he see’s the industry doing to the music he loves most. He goes as far to say, “Hip Hop and I have a love hate relationship. The same revolutionary spirit that once inspired me has been transformed into everything it once detested.” Those are some powerful words from this new kid on the block…or is he? I don’t think we can call him that since he is only the son of the late great Reggae artist Peter Tosh. He goes by the name of Tosh1 and he is on a mission to help Hip Hop find its way and to get major record labels to support “REAL” Hip Hop music. We need more thought provoking music a-la pioneers the likes of Public Enemy, KRS-One, Queen Latifah, 2-Pac, Will Smith, Arrested Development etc. Tosh1 wants to deliver a message of TRUTH without compromise in the language he is most familiar with…the language of struggle. With his deep roots in Reggae and his passionate, conscious-minded lyricals, he is already creating a name for himself with his energetic live performances that have stirred crowds into a frenzy around the world. I found this young man to be very intelligent, driven and engaging and now you get to find out more about the self-proclaimed “Real Rap Revolutionary” Tosh1.

It’s a pleasure to speak with you Tosh1. How was it growing up in Kingston, Jamaica and why the move to Boston, MA?

TOSH1 - Give thanks, thanks for having me. Actually I have been living in Boston since I was 5 so I pretty much grew up in the states. But even though I moved up here at a young age I remember observing a big difference in the two cultures. Jamaica is more laid back where as things were much more fast paced here in the states. And of course the poverty that we see in the ghettos of America is nothing compared to what you find in Jamaica’s poorest communities.

You are the son of legendary Reggae great Peter Tosh. No need to ask where your passion for music comes from but how did your fathers gift influence you?

TOSH1 - I have always been a fan of my father’s music, but as I grew older and more mature, I began to understand the importance of the message in his music. I felt a responsibility to carry on his legacy to my generation. For me, Peter Tosh was more than a musician. He was a modern day prophet and his fight for truth and rights was spiritual war that still exists today. So it is important that the message that my father represented continues to have a voice especially in these crucial times.

Did you get to meet the other Reggae legend Bob Marley and how close was he and your father?

TOSH1 - Unfortunately not, I was only a baby when he passed away.

If I may ask, how did your father’s untimely death affect you and has the mystery surrounding his death been solved?

TOSH1 - I don’t think I truly understood the impact of losing my father until I got older. Anyone loses either one of their parents at a young age its like losing part of your self. The role of a parent is to pass down the truth of their life experience to you, so when that is lost prematurely, its like you have to start back at square one. As far as the mystery of my father’s death, the triggermen involved in the murder were brought to justice. But as far as I am concerned, these men were sent, and the individuals who ordered the murder will probably never be revealed.

How did you first encounter Hip-Hop?

I know you have some really strong feelings toward the industry and Hip-Hop as a whole.

TOSH1 – (Cutting in) Yeah, most definitely.

Please explain your frustrations with the game?

TOSH1 - In my opinion, the game has been completely hi-jacked by corporate interests and is completely saturated with artists who do nothing but promote materialism, egotism, and self-indulgence. Just look at BET and MTV, all you see is video’s depicting this fantasy life that 90 percent of listeners can’t truly relate to, although they would like to imagine they can. This to me is not by accident but is a calculated decision made by those in the industry who have the power and money to see that Hip-Hop does not represent anything conscious. In doing so they have replaced substance with pure vanity.

I definitely feel where you are coming from on that tip. Dose this stance of yours contribute to you proclaim yourself the “Real Rap Revolutionary”?

TOSH1 - I see myself as an artist that represents the struggle against a shitstem that oppress the masses mentally, physically, and spiritually. And I know that I bring the message raw and uncut regardless of who agrees or disagrees.

Do you think the industry is open to and ready for the changes you believe it needs?

TOSH1 - To be honest, No! And I don’t think they ever will be. But fortunately the game has changed now due to the internet. Now independent artist have a lot more tools at their disposal to compete with major labels. Therefore, artists like me are able to create their own buzz and distribute their music to a global audience. So basically it’s a mute point whether the game is ready for the changes I believe it needs. I just have to do what I need to do musically and continue to expand my audience.

Your intellect is very refreshing I must say. Now, I’m hearing that your live performances are already becoming legendary. You’ve shared the stage with some real heavyweights. Give me some names and reflect on the experience. 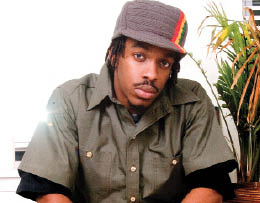 TOSH1 – Thanks! I have definitely had some great experiences in the live arena performing with artists like Shabba Ranks, Sizzla Kalonji, Sinead O’Conner, The Original Wailers, Damien Marley, and others. I believe my performances have been well received because people are always grateful that my fathers legacy is still thriving and to see his son performing his songs. Also I believe my music represents the change people truly want to see although they may not be willing to express it. I feel like they appreciate my energy and can see that I represent something genuine, authentic, and universal.

Tell me about the performance you had over in the Far East?

TOSH1 - I got the opportunity to perform with the Legendary Horace Andy. It wasn’t something planned as he just invited me to the show and I ended up performing. All I can say is that the Japanese showed me crazy love. The Japanese have a great appreciation for reggae music and it was made evident that night. I can’t wait to return.

You did a colabo with Daniel Brown (son of Lovers Rock/Reggae great Dennis Emmanuel Brown). What’s the name of the song and how did the two of you hook up?

TOSH1 – Yeah, actually Daniel and I recorded two tracks together. One is entitled “Roxanne’ and the other is “Rastafari Rules”. We linked up through a friend of my Father who was producing an album for him while he was in Boston.

Do you have a debut CD out now or in the works?

TOSH1 - Yes, the debut album is called “BABYLON BURNING” and will be released this coming summer.

Can you give us some insight on what to expect from this CD?

TOSH1 - My fans can look for something unique and original representing the true essence of Hip-Hop and Reggae infused with a revolutionary message.

Why has it taken you so long to produce your first album?

TOSH1 - Well it has been a slow process getting the necessary resources together to put the album out on the level we feel the project deserves. We are not working with millions but we still want to release the album on a major scale with top notch production and marketing.

That is understandable. Are you at all looking to get signed by a major label or would you be more content with and indie deal?

TOSH1 – Nah, I’m not really looking to get signed. I want to keep the rights to my music and release my album independently utilizing the same strategies the majors use.

Very wise decision. Has it been difficult for you to follow in your famous father’s foot steps?

TOSH1 - Well so far I have had a blessed experience carrying the torch and I have had many great opportunities.

I understand that you are an economics major. What suggestions could you give President Obama that could help us get out of the current financial crisis?

TOSH1 - Wooww. To be real, I don’t see any hope for the American Capitalist system. The financial crisis is just one small facet of the problem America faces and in order for this country to survive there has to be a fundamental change in ideology otherwise the decline will continue until the country is no more.

That’s deep my brother and on point. We might have to put a call in to the White House to get you in there. (Lol) What other talents or skills do you posses?

TOSH1 - More than being a musician I see myself as a gifted writer and orator all around. I also like to dabble in poetry as well and plan to incorporate some spoken word in my music.

Where do you see your budding career taking you in the next 5 years?

TOSH1 - I definitely see my music career taking me all over the globe attracting new fans wherever I touch down.

How can the readers find out more about you and your music?

TOSH1 - Well right now they can check me out on Myspace at www.myspace.com/jahtosh and look out for the official Tosh 1 website coming soon.

I want to thank you and your mother (Melody) for making this interview happen. I look forward to hearing your new music. Care to leave any final words?

TOSH1 – Yeah, to all my people in the struggle, continue to hold your head high and seek the Truth and decipher through all the lies and confusion. Continue to stand firm in Faith that the Great Day of the Father and the establishment of his eternal kingdom is near. May Jah Rastafari guide and protect you in all your ways.