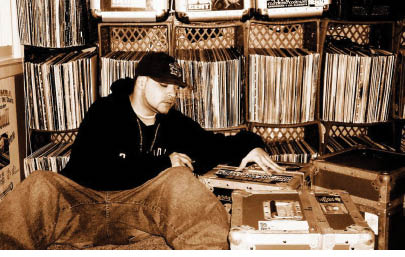 DJ Gumba is like a distant cousin to me LOL. I have known him since I was a little one, back in New York. He was good friends with my family, Mike Turchiano (bka: Uncle Mike). I have had the honor of hearing him spin out in LI and on his mix shows. Tune in online to www.StrongIslandRadio.com. Gumba is the BEST!

How did you get the name Gumba??

hahaha ok... this is always a funny one to me its often asked! Let me start by saying I am NOT Italian, I am half Puerto Rican & Half Irish.

The name Gumba has been with me since I was in the 8th grade. When I was younger I loved drawing and all types of artwork...as I grew a little older and my love for the hip hop developed, my love for artwork turned into a heavy appreciation & love for graffiti. I had many Tag names I would constantly post up around town but “GUMBA” stuck with me...people knew me by that and it stuck. when i started djing I just kept it with me...started writing “DJ GUMBA” on all my mixtapes and it stayed!

When did you realize you wanted to be a DJ?

1996 (when mixtapes were actual cassette tapes) I bought a DJ EV “HOTTER THIS YEAR” mixtape from a local record store here in Long Island, NY. I guess I was amazed about how dope it was put together! Homeboy was NASTY!... The intro, The cuts, the blends, even down to the tracklist...it was so onpoint and well constructed that you could listen to the tape non-stop all the way through both sides no problem! after listening several times lol i knew this is what i wanted to do. I was about 15 years old when my parents had gotten me a set of turntables & a mixer. I’d be in my basement for hours on hours practicing my kuts and mixing....thinking of dope blend ideas and samples for intro’s...... thats what i did all day, i couldnt get enough of it!

How did you become Keith Murray’s DJ?

A few years back my man Mike opened a studio out here in Long Island not far from Murray’s house. not long after it opened Keith heard of the local jump off and started comming down to record on a regular basis. this was years before I was able to record properly at my own crib, therefore this was my main studio spot where I did alot of my own work. Keith was already very familiar with my work, and now I was constantly in the studio with em’.

...this just led me to build a little closer with him and eventually start rocking with him...thats it!

Where were you born and raised?

Any artists you prefer working with over the others?

haha, ummmmmmmmmm I prefer working with artist over dj’s, I would never put anyone on blast so ima just say that.

Who have you done mix tapes with?

Ummmm, well KEITH MURRAY Hosted a Few, I have 1 Hosted By Miami’s Own TVT Recording Artist PITBULL off my “Straight out The Crate Series”, and Im about to soon do one hosted by the very well known Def Jam Recording artist REDMAN, thats also for the “Straight Out The Crate” series...I did one a few years back too it was me and my homie DJ CEL (Long Island Turntablist)...then another one simular with my man DJ STEALTH (Nina Sky’s DJ) im always thinking for new idea’s though, you cant stop grinding....you cant. theres always a younger dj who dreams of having your notch on the ladder! haha word up!....anyway I got tons of mixtapes of me just solo and alot hosted by local New York up and coming talent. Mixtapes is really what im rocking with for the most part right now, thats whats hott!

Besides yourself who is your favorite Mix Tape DJ & Why??

Id have to say DJ GREEN LANTERN. I say Dj Green Lantern because this man is putting the “mix” back in mixtape. its not just a cd with exclusives and a dj talking all over it, shouting out people who you have no idea even are. The dude has serious skill and entertains the listener with creativity throughout the mixtape. there is never a dull moment...you cant not enjoy it.

Who are your top 5 influences in the game??

Who are your 5 favorite radio personalities??

Are you a digital DJ or a Turntable DJ? & Why??

Well, let me see. Umm thats kinda funny to me thats thats even became a question now, but I’d say that yes I’ve evolved with the times and became “Digital” so to speak DJ haha. I mean I dunno, I really dont label any dj that. We have kinda all been forced to move with the times. I do use the Serato Scratch Live. I do Use The Pioneer CDJ1000’s, and I do rock steady with the Technic 1200’s! haha...I started djing back in 1997 before the Serato Scratch Live days so in my mind i think I’ve kinda earned it to switch digital...I know what its like to carry heavy ass crates of records through a crowed club..I know what its like to have to quickly search through a crate for a record.. & I know what its like to carry heavy ass crates through the airports! So now its just became alot easier for the DJ’s, thats really the reason why alot of Dj’s and even artist have converted...most of the time all of my music its on an extrenal harddrive....my vynl is 4 Serato Control Records. Travel became alot lighter!

Where do you hope to see yourself in 5-10years??

Any undiscovered artists you hope to make it big real soon?

dudes got a heavy street buzz on Long Island, and is doing his own thing real big over here with his own mixtape jumpoff’s...I respect that! Other Dj’s can search for his music DigiWaxx.Com

Tell me about your show Strong Island Radio?

My internet mixshow on Strong Island Radio is live to the world every wensday 4:30 to 5:30pm eastern time.

Its called “THE STREETS” Internet Radio Mixshow and I share it with my homeboy Dj Stealth. Im on one Week hes on the next. We have the freedom to really rock whatever we want on there Hip Hop, R&B, Reggae, Reggaton, Old School, Salsa, House hahaha you name it...they really dont care over there. We Broadcast right from my man L-A’s crib out in Nassau County Long Island...very kool, very layed back, very smokey enviorment haha!

How do you plan to help put LI on the map?

Cant reveal ALL my secrets Ms. Dawndada,...but you will see.

What music is in your IPOD??

Where can we catch you spinning??

I really dont have one set resident spot. Im all over, kinda jump around. Sometimes I rock the crazy ass bars in Long Island and others I’ll be at a dope club venue in Manhattan..its always different. People interested can see my shows posted on my myspace page the address is : www.myspace.com/djgumba631 . Outside the club or bar scene Listeners can tune in and download all my mixtapes & past radio mixshows totally free at www.musicv2.com/artist/djgumba .

Give me 3 oldschool sure shot party rockers you might play prime time at a bumpin venue?

When your NOT ripping the turntables at a club or in the studio what are you doing??

Any shout outs you want to give out??