Juelz and Daze: Ladies but Gangstas

The hip-hop game is changing more and more everyday and with that change comes new innovative ways of writing, rapping, and producing music. In that shuffle for change stands Juelz and Daze ready to take the industry by storm. Unlike many women in the game before them, Juelz and Daze have a unique blend of lady like elegance, charm and charisma but don’t get these two mc’s twisted; they have the gansta attitude to match the swaaga that represents their style of rap, “Gangsta-but-lady”. Adding a touch of R&B to their rap style gives it that extra ingredient needed to spice up the dull taste of hip-hop now. As the voice of any and all up and coming female rappers, Juelz and Daze stand strong, determined, and ready to do what they must in an industry that is wide open for anything including change.

The world will soon know Juelz and Daze!

So Ladies, how did you get involved in rap?

We began with poetry at an early age. We met when we were fourteen, combined our lyrics and voices, then realized we had a unique harmony. In that we found a signature sound.

You guys definitely have the look down pack. That whole sexy gangsta lady thing is a real good angle… But what I really want to know is, Who is Juelz and Daze and Why do you feel people should listen to your music?

Juelz and Daze are the product of the strong women who've taken their place instead of asking for it. We represent the educated, ambitious, and determined ladies of our time. We feel people should listen to our music because we not only have club bangers but we have songs about female empowerment, politics, the harsh realities of today's society,and most importantly all of our songs are based on personal experience. We have positive messages in our music and a sound to keep you listening.

Tell us, where has this game brought you and where do you expect it to take you?

The Industry has given us a deeper appreciation for good muisc. With every song we've recorded we've always thought of ways to make our music better. We've become more involved with the business aspect of the game and hope to learn all that their is to know. We expect it to take us all the way to the top because we know how to play our cards right.

You guys keep it gangsta but sexy at the same time… Not many artist have that swag. How do you think the industry will take to this type of style?

They'll love it! Men and women of all ages will respond to our music because they've been waiting to see artists like us. Respectable females that handle their business all day everyday we are magnetic to America's eyes.

What motivates you ladies and influences your style of music?

We feed off of life as we've seen it. Everything we've written is 100% fact which is why we have so many positive messages. We want to educate the youth with what we've learned, especially the young women being brought up in this society. Our style of music has been influenced by the west coast, east coast, and the dirty south sound. To name a few artists that have influenced us : Bone thugs & harmony, Tupac Shakur, Nas, Angie Martinez, and Ivy Queen. 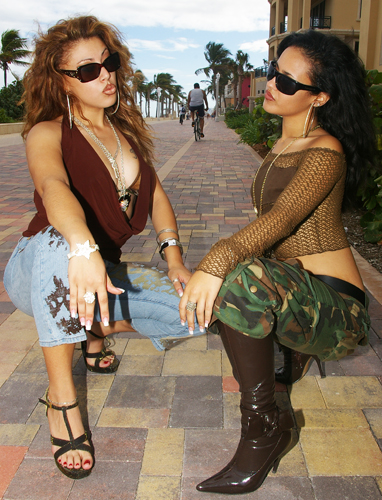 You guys are quite the performers; I had a chance to see you do your thing… How long have you guys been performing together and how does it feel to be on stage?

We've been performing since 2005 which is when we made our first appearance on Krib TV. There is no better high in the world than to be on stage. It feels like we're the puppetmasters and the world is dancing to our beat. We're living in a world of crackheads, heroin addicts, and coke heads, our high is to be on stage.

Who is the singer of the group?

We both sing and rap. We've found that when we're doing either one, we harmonize.

What made you decide to blend your singing with the rapping?

We've always loved to sing. We've never sat down and decided to rap and sing, it just always came with how we got the intensity of our feelings onto our music.


Do you guys have a choreographer or do you do your own choreography?

We've never had a routine, our moves have always came natural to us. We would unconsciously move the same way and just remember to do the same thing on stage.

Obviously everyone is in the game to get paid; I mean you have to eat… But what type of influence do you guys expect to have in the game? What can the youth derive from your music as positive?

WE DON'T RAP FOR MONEY! Juelz and Daze are educated individuals. There are so many ways and opportunities to make money, you just have to want it bad enough to go get it. We've chosen to be lyricists because we believe we've been blessed with the gift to speak and be heard. We want to create change and provide education. From our mistakes we want others to learn and from our music we want the youth to grow into leaders.

So how do you guys come up with the lyrics you compose?

Our lyrics are our lives. The times we've tripped and fell or put or fingers on the flame and got burnt is what we write about and which is what life is all about. Wisdom and ambition is what makes a writer an author.

How is the production of your music coming along?

We began ghetto fabulous but with every step we've taken every aspect of our profession has improved. Juelz and Daze always keep it a step up from the last time.

Do you guys rap and or sing in Spanish?

Yes, we both rap and sing in Spanish. Juelz is Colombian and Mexican, Daze is Dominican and Venezuelan. We are very influenced by our culture and very proud of how we were raised.

If not rapping, dancing or singing, what would you guys be doing?

That's a good question! We've always known we were born to do this so the thought of doing something else has never entered our minds. Our music is what has kept us out of serious trouble. While others have had their hustle, this has been our grind

How do you guys feel about the current state of hip-hop?

It's a damn shame! Hip Hop has always been the art of the oppressed. It's supposed to be the written account of an individual's struggle to where they want to go and where they've been. With Hip Hop the right person can spark a revolution and better our society.The way Tupac reached all of his fans threw his experiences is what Hip Hop is all about. The way Public Enemy fought back with their controversial lyrics is what has been missing for too long. It's about culture, truth, and the feeling a person gets when a melody enters their mind and the words are just as deep as the tune that hit them. 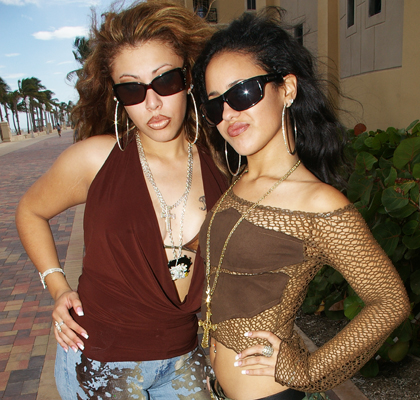 Where do you feel hip-hop will be in the next five to ten years?

Their are movements going on now such as "Hoodstock" which are trying to expose talented artists that are trying to improve the game .Positive messages is what is needed and it's being realized now more than ever. The voice of the people is what is most important so with enough action, change will come.

What do you like most about what you currently do?

The ability to spread our ideas and opinions to the youth. We want the people that are listening to us to know that we were them. We've had our share of struggles and to have people listen and take in our lyrics is what matters most to us. When we see people vibing and singing along to our music, there is no other word to describe that better than ecstasy.

How are the fans taking to your music and style of rap?

So far we've had positive feedback and constructive criticism. We try to provide different songs for different moods so if you want to get crunk we have a song for that, if you're on a date we got you, if you're angry we most definitely have a song for you. Variety is the key to success so lets just say we unlocked the game.

Are you guys getting the type of hometown love you expected?

Most definitely . People are respecting us more and more because two ladies are representing for the city in a way it's never been done before. Men and women are showing love because we're speaking for the real Dade County residents. The people like new, fresh music so we're here to give it to them.

How can the fans keep up with you moving career? Is there a website or MySpace they can visit?

Keep your ears and eyes open! Check us out at www.MySPACE.com/JUELZDAZE and you can email us at This email address is being protected from spambots. You need JavaScript enabled to view it..

How can a fan buy the Juelz and Daze album?

Check out our MYSPACE until the album drops!

Is there anything else you would like to add before we close this interview?

GET READY WORLD! ONCE WE AT THE TOP WE NOT STEPPIN DOWN!

Thanks for taking the time out to do this interview with Nine5Four The Magazine. We really appreciate your time and of course keep doing your thing. The final destination is the TOP… See you guys there…
Tweet
More in this category: « T. Shaw One-on-One With Hollywood’s Finest! »
back to top
Current Issue