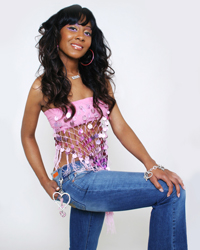 She has the moves. She has the determaination and now she is ready to leave her mark on THE R&B scene. Lafonda, once a Diva in the making is a Diva and is about to shake up the music industry with her moves and unstoppable voice. Nine5Four had a chance to yet again talk to this superstar singer in the making!


Nine5Four: How are you doing tonight?


Nine5Four: I hear you on that... So how is the music coming along?

Lafonda: The Music is coming along very very well. I have some events coming up this summer including my new Mixtape Called "GO HARD OR GO HOME"


Nine5Four: Wow... So you are getting ready to do big things... Are you currently working on any new projects??

Lafonda: Yes My New Mixtape Go Hard or Go Home which is hosted by DJ Bedtyme 357. The Mixtape is definitely going to be a Hot one. I have some cool features on the album which includes artist like Esso who is from Harlem in New York and SHY Dirty who from the south. So I'm very excited for the release which come out in the middle of next month June 15.

Lafonda: I will also be coming out with a DVD at the end of this year 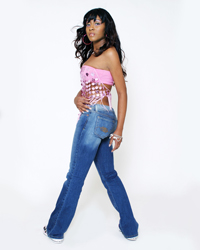 Nine5Four: WOW... Talk about being on the grind. So tell us, what has happened since we last spoke? Have you learned anything new about the industry? Has anything significant happened to you or changed in your life since last year?

Lafonda: The Last Time we spoke I had recently Performed on B.E.T.S 106 & Park wild out Wednesdays. Which was a very good look for me. I put a lot of people into shock because I guess they weren’t expecting me to be on the show plus I never mentioned it to any one because I wanted to surprise everyone. It was definitely a surprise because there are so many singers that are trying to get on the show and after auditioning and competing against Hundreds of people I actually got the opportunity to perform.


Nine5Four: So what kind of effect did performing on BET have on your career??

Lafonda: Unfortunately I did not win the competition but... I did gain a fan base after shouting out my MySpace and website on the show. It was crazy because that night I was literally receiving hundreds of positive messages on the site which really made me feel good and it definitely inspired me. Sometimes you really need to hear positive feedback from people to keep you going. So that was a good look because my buzz got a little bigger and now I have

Lafonda: People asking me " When are you going to be performing again"? I actually had a few fans come at the very last show I did. It was cool =)


Nine5Four: That's what's up... It makes you feel good to know you have the support of fans... Congrats on that... So have you been recording any new songs??

Lafonda: oh yes yes!! Let me tell you I am always recording, Always. besides the songs on the mixtape I have at least 14 more records that I am not going to release yet. On my new CD I only choose to use 10 records to promote. but yes I am constantly recording. As an Artist you have to always have songs, always. Especially if you are looking to get signed. A&R 's always want to hear something new. So yes I have new songs. Right now the next song that I working on is this Ballad called "One Question" It's one of....

Lafonda: those powerful songs that just puts you into tears when you hear it. It put it into tears so far while learning it. but unfortunately it's going to be on this upcoming CD. LOL

Lafonda: lol ok those powerful songs that just put you into tears when you listen to it. It put me into tears while learning it. but unfortunately it NOT going to be on this upcoming CD lol 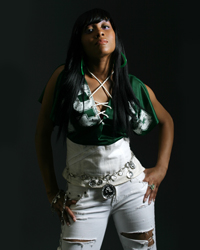 Nine5Four: No doubt.. No doubt.. So do you have any club joints on the upcoming CD?

Lafonda: Yes I do one of the first club Joint I have on the CD is called "Built like that" Featuring Shy Dirty and Produced by Playboy- Chi. The Record basically talks about a guy who is hanging in the club trying to get with this girl and he's trying to impress her by telling her that he has all this money and all these cars and all this jewelry believing that because he has all of that he could possibly grab her heart but little does he know she is not the type of girl that want all of his money and she saying ....

Lafonda: "You have all of these things but are you built to be my man"? Are you built like that?


Nine5Four: Lol.. Ok I am feeling the concept... So the new album will show some versatility... What are you calling the album??

Lafonda: Yes that is the mixtape" Go Hard or Go Home". It's a mixtape album LP. It's so crazy how I got the title for the mixtape album because while recording songs before my producer and I even thought about putting together the album. After I would finish recording each song I would say "Go Hard or Go Home" Meaning Work hard or Just don't work at all! or shall I say give up. I say that because this industry is very hard to break into and so my opinion is to just give 100% when you work....

Lafonda: When you're on stage , when you’re in the studio, when you're writing songs. It's always great to give your all. Go hard or go home lol


Nine5Four: This is true indeed... So do you have any upcoming shows or performance fans can go and check out?

Lafonda: Well right now we are booking some show this summer, definitely going to be promoting the CD this summer. So Please check out www.Lafonda.com or www.myspace.com/Lafonda

Lafonda: for upcoming shows and events


Nine5Four: No doubt no doubt... So do you have any advice for upcoming artist struggling to get into the industry??

Lafonda: Yes I do have advice. Artist please continue to work hard. If this is something that you really want to do stay focus and don't ever let anyone say that you can't do something. I believe that anyone can do anything that they want to do when you put your mind to it. STAY AWAY from the negatives STAY AWAY from the SNAKES. Always surround yourself around POSITIVE people . If you can ... try to surround yourself around people who have the same common goals . And no matter what always "GO HARD" 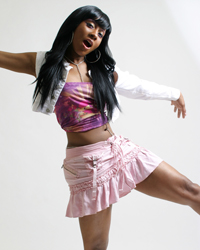 Nine5Four: True True.... Is there anything else you would like to add? Any shout outs?? Last words??

Lafonda: Yes first I want to give shout outs to the fans that's been supportive of me. Thank you so much. I want to thank my producer playboy chi for believing in me. the whole sleepless productions. Shout outs to my Team The "Bombshell Squad" Jobaire, Shashone, Ashley, Robert, Tiffany Johnson. Tasha Camp. My Lawyer B. Celesten. Shout out to My Inspiration my mother . shouts to DJ Bedtyme 357 for hosting the mixtape. Shout out's to all the dj's out there who have been spinning some of my records. And shout out's to

Lafonda: Nine5Four who's giving me this interview. Thank you so much


Nine5Four: Thank you so much for allowing us to feature you again... I think you have a great talent and I wish you the best of luck in your career....

More in this category: « TL - No Limits Tramayne "Living his dream" »
back to top
Current Issue