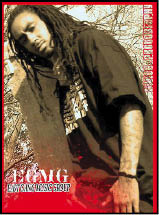 Thoughts: What really attracted me to this artist is his main song being a love song that still goes hard because those tracks are hard to come across these days without them sounding commercial. The beat on the love song I’m referring to, “Closer than Close” is nice as well; it’s just a song you can ride to male or female. All of The Show’s songs are quite laid back and can be considered easy listening which is pleasant compared to the upbeat crunk club bangers that cloud the radios these days. Being that he is from the east side of New Orleans he has a different vibe to his music in comparison to other southern rappers. Another thing that can be said about this upcoming New Orleans rapper is that he is surprisingly lyrical. taken as a whole The Show is a artist that could make it if he accumulated a larger fanbase and established some more vital connections.

Tweet
More in this category: « PALM BEACH COUNTY’S 56ACE One Man...So Much Talent »
back to top
Current Issue