One on One with Randall “Ko King” Bailey: He weighs in on the upcoming Mayweather vs Pacquiao Fight 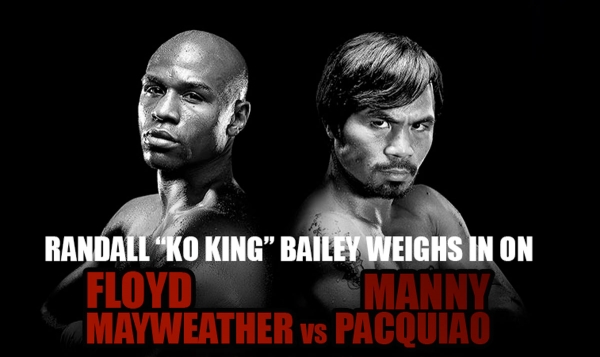 The Floyd Mayweather vs Manny Pacquiao fight might be one of the most anticipated fights in the history of boxing; fans have been looking forward to this bout for several years now. When dealing with a fight of this magnitude you are going to have different opinions, and theories of who will win and why. I respect the water cooler and barbershop debates but what I respect even more is the opinion of someone who is battle tested and proven in the Ring. I recently sat down with my boy Randall "ko King" Bailey to get his thoughts on the Big Fight. Bailey has a record of 44 wins and 8 losses with a total of 37 knockouts, he has held both WBA Light welterweight and the IBF Welterweight belt.

Are you shocked that this fight is actually happening? No, I'm not surprised the fight is happening. It’s no secret that Floyd Mayweather loves money and this fight is by far the biggest fight in our era in Boxing.

What do you think the holdup was for this fight? It takes a lot to put a Mega fight together and it can't get any bigger than what we will see on May 2nd. I think each side had to make sure they both were compensated to their liking, but it was time for the fight to happen

How would you compare Pacquiao’s style to Floyd’s? Mayweather is a speed thinker in the Ring everything you want to do he will beat you to it and take it away from you. Where Pac Man is all speed and will overwhelm you with Punches in Bunches. Manny also gives you a lot of Footwork and different angles. When you are in the ring with him you always have to find him.

Do you predict any knockouts? I don't predict a Knockout but stranger things have happened, I feel Floyd needs to be ready from the opening bell because many definitely is going to try and steal first half of fight.

Who do you think has the edge? I don't think anybody really has an edge because both guys are going to be ready! I feel who ever puts their game plan in effect and is able to sustain it will win.

Who would be your toughest opponent? They’re both tough opponents for anybody they are by far two of the best fighters in boxing today.

Are we going to see you back in the ring again?  Well I'm Training now waiting for the call yah know, hopefully by June or sooner.

What projects are you working on? Well right now I'm really not venturing out right now. I’m just trying to stay focused on boxing so that when I do get in the Ring I'll be fundamentally ready for whatever I'm up against.

More in this category: The International Queen of Fitness: Sue Lasmar »
back to top
Current Issue